The Mercedes EQC luxury SUV delivers good electric range and superb levels of comfort and refinement, but it’s expensive and a little uninspiring to drive. 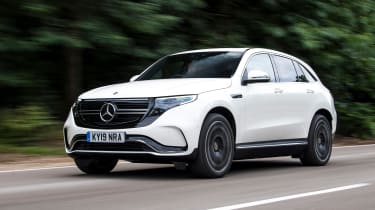 If you’re looking to spend serious money on a luxury, all-electric SUV, then the Mercedes EQC is one to consider. Ride comfort and overall refinement are up there with its combustion-engined cousins, while there’s plenty of safety kit and on-board tech that help to justify the EQC’s rather steep asking price.

Interior space is a little compromised when compared to rivals and the EQC’s considerable weight takes away from the driving experience. However, the super-quick, straight-line pace certainly puts a smile on your face, and the usable electric range is good enough for us to recommend the car.

The Mercedes EQC is based on the Concept EQ, which was first shown at the 2016 Paris Motor Show. The SUV was the manufacturer’s first all-electric production vehicle and begins a move away from the internal-combustion engine and towards a cleaner, greener model range.

It may seem a little strange for Mercedes to kick off its electric revolution by introducing a big, heavy SUV, but it has a host of new battery-powered cars to launch over the next few years, and needs time to build profitable economies of scale with its smaller models. SUVs generally suit electric powertrains too, thanks to their tall shape that leaves space in the floor area for the batteries.

Instead of designing a custom EV platform, Mercedes has based the EQC on architecture used on the existing GLC model. Its Audi e-tron rival also shares parts with its Q5 and Q7 siblings, but other competitors such as the Jaguar I-Pace and Tesla Model X have been designed from the ground up on new platforms, which gives flexibility to maximise interior space and keep overall weight down. 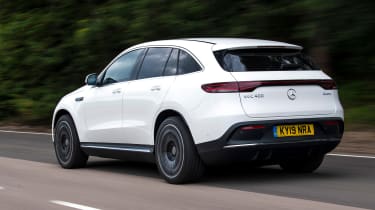 Power for the five-door EQC comes from an 80kwh battery, with an electric motor at each axle. This set-up brings a useful total output of 403bhp, but more significantly there’s a huge 760Nm of torque instantly available from the first press of the accelerator. Of course, being a full electric vehicle, the EQC operates a single-speed automatic transmission.

Despite weighing in at almost two-and-a-half-tonnes, the EQC is capable of 0-62mph in 5.1 seconds and also maintains a claimed range of up to 252 miles on a single charge.

Prices start from over £65,000 for the entry-level Sport version, with the range building through AMG Line, AMG Line Premium and Premium Plus equipment lines. All cars are well kitted out, particularly with the inclusion of active safety systems such as Blind Spot Assist and Active Lane Departure Warning.

For an alternative review on the Mercedes EQC visit our sister site drivingelectric.com