MINI has introduced a new automatic seven-speed gearbox to its range, promising more economy than its predecessor 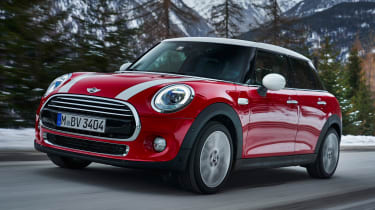 While the improvements might be incremental, the introduction of this new dual-clutch gearbox makes the MINI Auto more appealing than ever. It’s relatively smooth around town, while the seamless changes make it a refined cruiser, too. The fact it costs no more than before is the icing on the cake.

When the original ‘new’ MINI arrived in 2001, it was available with a choice of manual and automatic gearboxes. However, the slow and stentorian CVT failed to find favour among picky small car buyers.

The second-generation car saw the introduction of a much-improved torque converter auto. It gave the premium MINI a more mature personality, as well as better refinement and superior performance.

Now, however, the MINI One, One D and Cooper D have been fitted with an all-new seven-speed dual-clutch (DCT) gearbox – replacing the old six-speed unit in the existing car. The box will be fitted to the three and five-door hatchbacks, as well as the two-door Convertible. 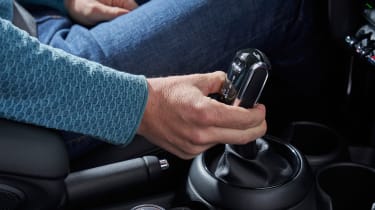 The only visual difference between the two cars is the new electronic gear lever. It replaces the larger, more traditional-looking shifter – though even the revised version does without steering wheel-mounted paddles. It’s a neat design, though, and can be operated manually by pushing it fore and aft.

Despite questions over the low-speed refinement of DCT gearboxes, the new MINI Auto feels comfortable around town. It has a tendency to creep without a heavy foot on the brake pedal, but you quickly learn to live with it – and when you do, it’s pretty painless.

On the move, it’s much smoother than before. In normal driving the shifts are almost imperceptible, switching cogs easily and efficiently. It’s pretty happy to change down when you floor the throttle, too, although paddles would make the process more seamless still.

There is no lurching as it works up the ratios, allowing you to build speed without hesitation. It’s a good match to the 114bhp three-cylinder Cooper D engine, too, which never feels particularly rattily – even when holding on to the gears in manual mode. 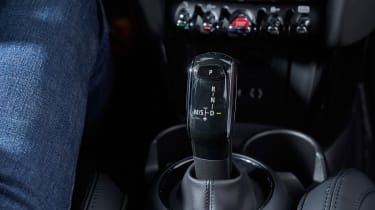 MINI says that while the new gearbox weighs near enough the same as the old one, the extra cog and new electronic clutches mean it should be around five per cent more economical. However, with the new WLTP test procedures now applicable for all new cars – on paper, at least – the differences are less quantifiable.

Elsewhere, it’s business as usual. The MINI is still one of the finest-handling small cars on sale, and fitted with a punchy diesel engine it is both quick and quiet. The steering is direct and well weighted, and while the ride is firm, it strikes a good balance of comfort and handling.

For the time being, the petrol Cooper and Cooper S will continue to use the old six-speed auto, while the Cooper SD and JCW get an eight-speed version. We’re assured that in time, however, the new DCT will feature across almost every model in the MINI range.