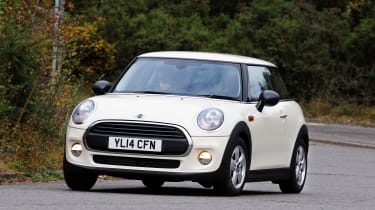 While the MINI One D looks great, is very economical and drives well, the more punchy Cooper D is worth the extra £1,560 cash. For that money you not only get more kit, but the extra power means you can exploit the MINI’s brilliant chassis that little bit better, which makes it more fun, and that’s what a MINI should be.

The new MINI was named Auto Express Car of the Year for 2014 and now we've driven the new entry-level diesel MINI One D for the first time.

The MINI One D starts at £14,890, which is £1,560 less than the Cooper, and shares the same 1.5-litre three cylinder turbo diesel engine. The only difference being that the powerplant is detuned from 114bhp to 94bhp. 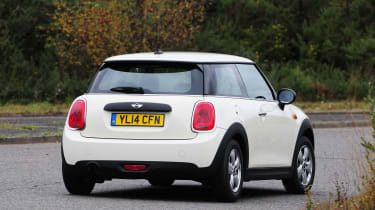 But even in the lower state of tune the diesel is a gem. Start it up and you’d be forgiven for thinking it was actually a petrol, as it’s that quiet. Only those outside the car will be able to make out the tell-tale diesel clatter – and even then it’s faint.

When you are driving you don’t notice it at all, unless you rev the engine to over 4,500rpm. But there’s little point doing that anyway unless you are attempting to verify the car’s 11-second 0-62mph sprint time. Actually, under normal driving conditions the One D feels quicker than this number suggests. You can thank the 230Nm of torque for that.

In everyday driving the car provides ample pace. At motorway speeds, however, you can just about notice the 40Nm deficit compared to the Cooper, as overtaking is more likely to require a changing down a gear. At least the six speed manual’s positive mechanical feel makes it pleasant to use. 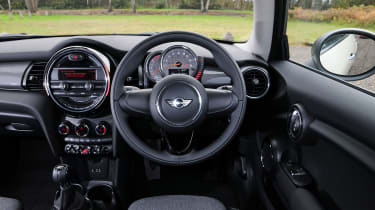 The One fights back against the Cooper with slightly superior economy, though the 3mpg improvement over the Cooper isn't anything to get overexcited about. Out on our 25-mile test drive on a variety of roads we averaged 55mpg. Quite a bit off the claimed 83mpg, sure, but not bad for real world driving.

In terms of handling there is no difference between the two cars as they share the same chassis settings, which means the One is just as responsive and darty. And it’s this point which actually forces the issue. The MINI’s fun handling is better complimented by the slightly more powerful engine in the Cooper D.

Were we talking about a diesel powered Volkswagen Polo or Vauxhall Corsa a 20hp deficit would matter not. But here it does. After all, with a MINI you are already making a few compromises. You are not only paying a premium, but also forsaking rear passenger and boot space in order to have a car which is more fun to drive than a normal supermini.