The limited edition 1499 GT boasts head-turning style, but based on a basic MINI, it could do with more power 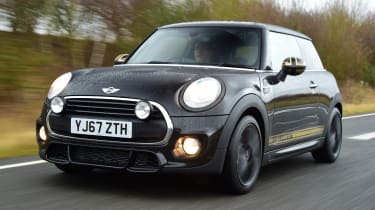 As ever with a special edition, your personal taste will dictate whether or not it’s the car for you. After all, this is still just a MINI underneath – so it’s basically a good car – and there’s no doubt that it looks good. But, in a range that offers so much scope for personalisation, only you can decide if this particular package is the right one for you.

Some things have been constant throughout MINI’s long and successful history. There’s that unique shape, for a start, the ‘go-kart’ handling, the circular headlights – and special editions.

And, in keeping with the car’s proud heritage, the latest one to try and tempt buyers has a classic twist. The 1499 GT is inspired by the 1275 GT that was first seen nearly 50 years ago, all the way back in 1969.

In both cars, the number is significant; and, in the case of the 1499 GT, it reflects the fact that just 1,499 examples will be built. However, whereas the 1275 of the classic told you that it had a bigger engine than the regular model, the 1499 GT is based on the least powerful petrol-engined model in the current MINI range, the MINI One. 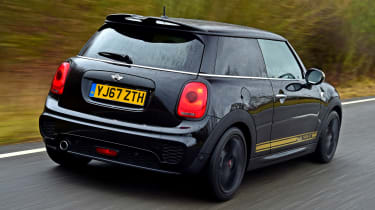 What makes the 1499 GT stand out is the unique package of extras; and, in this instance, they’re pretty much all to do with the way it looks.

Buyers have a choice of just two colours – Pepper White or the Midnight Black of the car in our pictures – but common to both are distinctive side stripes and the John Cooper Works Sport Pack. This includes black 17-inch alloys, tinted windows and white indicator lenses, as well as unique bumpers, side skirts and a split-level spoiler.

The car is also fitted with sports suspension, while the sports seats are part-trimmed in leather, and the multi-function steering wheel has red stitching. The finishing touches are various black details around the cabin, as well as an anthracite roof lining.

That’s all very well and good – after all, much of the MINI’s appeal lies in how much you can personalise it – but in many ways, the weak link is the base car. For us, the MINI One’s petrol engine just doesn’t have enough power to make the most of the MINI’s chassis or to provide the kind of performance the bodykit suggests it should be capable of. 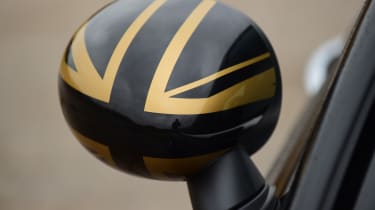 The engine can be rather hesitant away from the mark, unless you rev it pretty hard – in fact, it’s quite easy to stall the car; it doesn’t accelerate all that quickly, even once you’re up and running; and, last but not least, it doesn’t sound all that sporty, either.

Of course, being a MINI, the 1499 GT handles really well, and that famous ‘go-kart’ feel is all present and correct. So, this car is a lot of fun to drive. But, the sports suspension results in a ride that is too firm too much of the time.

And, while we’re talking about downsides, as in any MINI, the cabin is a bit of a mess in terms of its ergonomics. The buttons and switches are scattered seemingly at random across the dashboard, while the 1499 GT – which comes only with the three-door body – is far from the most practical car of its type. 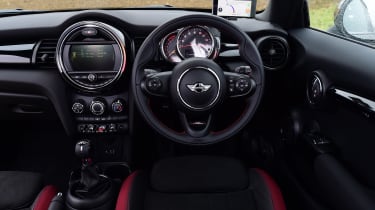 Then again, practicality may well not be the biggest issue if you’re considering a MINI in the first place. Instead, perhaps the biggest stumbling block is the price. At £16,990, the 1499 GT is more expensive than a basic MINI Cooper, which is our favourite version of the MINI. Okay, the Cooper may not have all the head-turning styling of the special edition, but it does have a more powerful engine that turns the MINI into the car that it should be.

We know where we’d put our money…