We’ve already been impressed by Peugeot’s new 3008 SUV in petrol auto form, but can the diesel deliver the knockout punch? 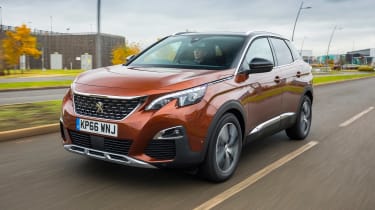 The new Peugeot 3008 couldn’t be more of a revelation compared to its predecessor. The distinctive exterior styling is enough to worry the class best, but it’s the classy and tech-laden interior that really stands out. The 3008 also ticks the boxes in terms of practicality, efficiency and safety. A SEAT Ateca is a bit more engaging to drive and cheaper to buy, but where it matters in this segment the 3008 runs it very close.

The crossover sector has almost reached full saturation, because pretty much every major brand has its own rugged SUV offering competing for attention. Peugeot has had to make do with the dowdy old 3008 for some time, and even brand bosses admit it was more MPV than SUV. With challengers like the excellent SEAT Ateca and Renault Kadjar, Peugeot knew that it couldn’t field another also-ran the second time around.

That’s why this second-generation 3008 is new from the ground up. The distinctive chiselled face and classy two-tone rear end bear absolutely no resemblance to the old car, and underneath sits Peugeot’s new, lighter EMP2 platform.

Some of the powertrains are familiar, although they’ve been revised to improve refinement and power delivery. We’re driving the predicted best-seller in the range: the most powerful 118bhp 1.6-litre BlueHDi diesel with a six-speed manual gearbox. 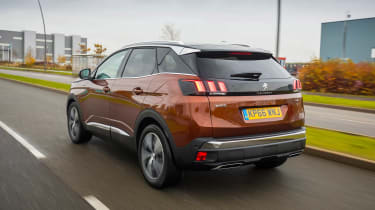 Our first chance to try the 3008 in the UK was a left-hand drive 1.6-litre petrol automatic. While the powertrain was fundamentally fine, its high emissions and pricetag don’t represent Peugeot’s SUV in its best light. More buyers are expected to opt for the more modest diesel and spec the 3008 up to the GT Line trim we have here. Its price of £27,345 still doesn’t look cheap, at around £3,000 more than a SEAT Ateca First Edition, but Peugeot is promising that finance deals will be more competitive.

The 1.6-litre diesel is an impressive unit. As in other PSA models which feature it, the punchy torque delivery belies its modest size and performance in the 3008. It’s also commendably smooth, with an intrusive diesel rattle only evident right at the top of the rev band. A 0-62mph time of 11.2 seconds may not sound spectacular, but it feels faster than the figures suggest.

Helping you make the most of the performance is a manual gearbox that’s less notchy than we’ve found in other Peugeot models like the 308 hatchback. And as this 3008 is considerably lighter than the old car, it’s no surprise that efficiency figures appear very competitive on paper: a combined 65.7mpg and CO2 emissions of 104g/km compare favourably with the 1.6-litre SEAT Ateca diesel’s 64.2mpg and 114g/km.

The rest of the driving experience is commendably good. The steering is light but accurate, and the 3008 feels keen to turn in, with strong front-end grip levels, even in the wet. Sport mode makes the throttle more responsive and the steering heavier, although the artificial engine note pumped through the speakers won’t be to all tastes. 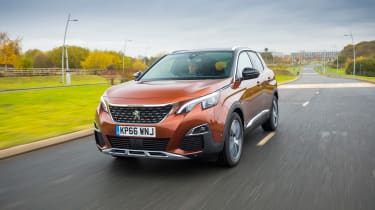 Body control is tidy, too, and although the Ateca feels more involving at times, the Peugeot still offers a good blend of ride and handling. Even with the 18-inch alloys on our test car, rough tarmac is isolated from the cabin pretty well. Big bumps and really rough roads can cause the odd thump to make itself felt, however. There’s a touch of road and tyre noise, but it’s no worse than any similarly-shod rivals, and wind noise is notable by its absence.

It’s not the driving experience that’s paramount for buyers in this segment, however. Potential 3008 customers are likely to be swayed by the classy, attractive interior design. Peugeot is introducing the second generation of its controversial i-Cockpit driver-focused cabin design on the 3008, with a number of key improvements. 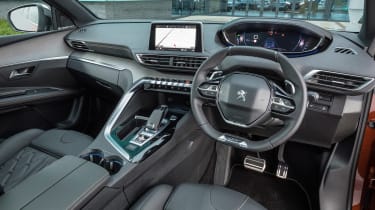 All models now get a 12.3-inch digital instrument display across the range; it features slick graphics and can be customised to show a mixture of instruments, navigation maps and trip info. It’s positioned higher than the 308’s traditional dials, too, meaning it’s less likely to be obstructed by the steering wheel.

Quality is really impressive, with fabric coatings on the doors and metallic switchgear that feels polished to the touch, and the whole cabin has a really pleasing ambience for a car of this price. A SEAT Ateca looks plain inside by comparison.

Kit levels are impressive, particularly on GT Line models, which feature full LED headlamps, an electric massaging driver’s seat, wireless phone charging, an intuitive eight-inch touchscreen sat-nav with Apple CarPlay and a huge number of smartphone connectivity features. Practicality is a strong-point, too: There’s enough space in the back for two adults to sit comfortably, and the 520-litre boot eclipses the Nissan Qashqai’s 430 litres.