What to look for, how much you should pay and what can go wrong with the trendsetting Renault Scenic 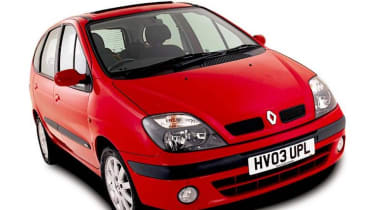 The Renault Scenic is a true landmark car. When it hit the showrooms in 1997, it immediately exposed the limitations of conventional family vehicles. Here was a motor that combined all the best qualities of a hatchback, estate and MPV - yet which drove like a car, and was affordable.

A mere 10mm longer than the Megane on which it's based, the taller Scenic gives amazing interior space and has a huge array of cubby holes and storage areas. Here we look at the compact MPV that started a revolution, offering lots of space for little cash.

Buy the youngest car you can afford, as early versions are less well equipped than later examples. Small engines also struggle. Facelifted 2.0-litre 16-valve Scenics have a crashy ride, so test one before buying. If you can, steer clear of pre-facelift vehicles because newer models performed better in crash tests. The pick of the bunch is a post-1999 car with a diesel unit and a high spec.

Christine Handy, from Stoke, has owned her 2000 Scenic for four years and can't imagine running any other car. She said: "With two young children it's everything I could want in an MPV. My 2.0-litre model has been reliable, but next time I would choose a more economical diesel."

While it is an eight-year-old design, the original Renault Scenic is still worth investigating, although the better equipped and safer facelifted models are the top buys. All benefit from low running costs, thanks to economical engines and cheap servicing, while it's a pretty good car to drive, too. We recommend searching out well specced models. And thanks to the Scenic's popularity new, there are plenty of examples to choose from. Many cars have tried to copy the Scenic's blueprint for success, but few have managed to match its all-round appeal, let alone beat it. We like the excellent dynamics, flexible interior layout, storage space and high driving position. We don't like the two-star Euro NCAP rating on pre-1999 cars, weak, small engines and the awkward gearchange.