The Subaru Forester SUV is rare on UK roads, but will the new model change that? We’ve been for an exclusive first drive to find out… 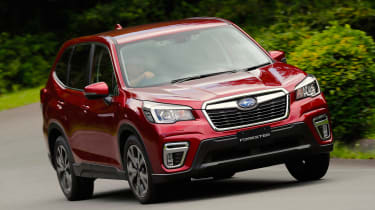 Despite being relatively rare in the UK, the Forester is a big global seller. As such, the maker had no choice but to make the large SUV more relevant. It might not be as much fun to drive as rivals, but it’s a much-improved all-rounder. More comfortable, refined and safer, it deserves to succeed in a way its predecessor could not.

Enthusiasts may mourn the demise of Subaru’s World Rally exploits, but, globally at least, it hasn’t harmed the firm’s success. Now more family and safety focused, the Japanese manufacturer is forging ahead with its latest model onslaught.

Last year saw the debut of an all-new Impreza, and 2018 heralds a fresh Forester. While there’s no manual gearbox, no diesel and no XT Turbo in the line-up, there is hope for the revised SUV. The all-new 2019 model we drove near Tokyo promises to be better than its predecessor in almost every way, in fact.

Subaru claims the latest version is better to drive, more comfortable and, of course, more efficient. Making all that possible is the employment of the new Subaru Global Platform (SGP). 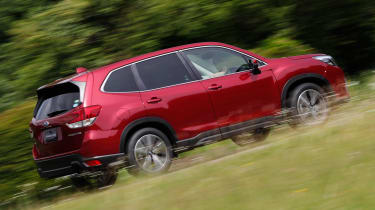 After the Impreza and new XV, the Forester SUV is the third model to incorporate this architecture – a structure that has the highest crash rating in its home market of Japan. Basically the same size as before but with an extra 35mm in the wheelbase, the platform has allowed the Forester’s designers to improve the amount of interior space, as well as leg and headroom.

With its boxy shape and strong edges, the outgoing model wasn’t pretty. But the Forester wasn’t designed to win any beauty awards. It was developed to get the job done, and the model is still a triumph of function over form.

There are two engines on offer this time around. The first is a revised, naturally aspirated 2.5-litre boxer unit, while a brand-new 2.0-litre four-cylinder hybrid – aptly called e-Boxer – will also feature. But the latter motor hasn’t yet been confirmed for Europe or the UK.

Linked to a CVT auto box, the 2.5-litre engine produces 180bhp and 239Nm of torque. It isn’t the most powerful car in its class (the new Honda CR-V uses a 1.5-litre turbo boasting 190bhp), and the engine feels adequate rather than urgent, delivering a strong burst of torque between 3,000 and 5,500rpm.

The CVT transmission has been improved and delivers more natural shifts, as well as less noise and fewer vibrations under load. Laden with five adults and their luggage, this is the engine you’d want for long trips or off-road driving. Needless to say, the latter remains one of the Forester’s fortes.

During our short test of this early pre-production model, it is clear the new Forester makes strides over the car it replaces. Thanks to the new platform, revised suspension, new steering rack  and the brand’s tried-and-tested all-wheel-drive system, the Forester resists body roll in corners and turns in with greater accuracy. The steering is well weighted, and helps make the car feel lighter and more agile on its feet than its predecessor, even with that modest non-turbo Boxer engine. The brakes have also been enhanced and deliver greater stopping power than before. 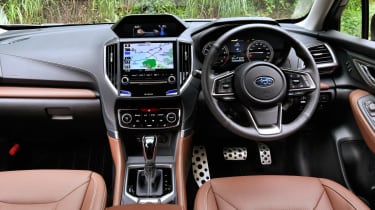 But this time, the SUV also employs the firm’s new DriverFocus technology, a feature that uses facial recognition software to warn drivers who show signs of fatigue or get distracted behind the wheel. Once your driving position has been programmed, the car will use its dashboard-mounted camera to acknowledge drivers and automatically adjust the seats, mirrors and the air-conditioning system to suit the individual. According to Subaru, this is a first for a car at this price point.

Inside, the Forester employs higher- quality materials and plastics than the outgoing model. There is a plusher ambience and more supportive seats, as well as an intuitive dash layout and a big central touchscreen. It’s certainly preferable to the interface in a Toyota RAV4, although as specs haven’t been announced, it’s hard to draw definitive conclusions on how it stacks up against its rivals. Every UK-bound new Impreza does without sat-nav, for example.