The new Volkswagen Amarok is the only 4x4 double cab in its class with a V6 turbodiesel engine - how does it shape up? 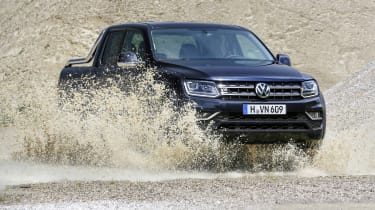 With a punchy new V6 diesel and a new premium interior, the lavishly equipped Volkswagen Amarok gets closer than ever in feel to a large and luxurious SUV. VW doesn’t offer a two-door version of the Amarok, so is targeting almost exclusively those premium pick-up users who are as interested in the double cab’s tax advantages as its commercial vehicle credentials. It’s not as good as an SUV on the road, nor as practical as a van, but the new engine and ‘connected’ interior (plus those tax benefits) make the Amarok a strong contender in the pick-up niche - albeit a relatively pricey one.

There are more discreet tax avoidance schemes than driving a new 3.0-litre V6 diesel powered Volkswagen Amarok. It’s the latest in a batch of large and luxurious double-cab 4x4 pick-ups that seemingly want to rub the taxman’s nose in the loophole around ‘dual usage’ light commercial vehicles with four seats and a 1,000kg load capacity. Nissan’s Navara, Mitsubishi’s L200 and the Ford Ranger will all be key rivals for the big VW.

In the UK the Amarok has always been pitched squarely at the ‘premium’ pick-up sector, so you’re more likely to see one towing a jet-ski to the beach at the weekend, than loaded with a pallet of bricks on any working day. The new version moves things further in the same direction, thanks to a punchy new 3.0 V6 TDI engine that replaces the current 2.0-litre units, and a new interior with VW’s latest connectivity features.

The first of those upgrades is designed to answer owner feedback that 2.0-litre engines are insufficiently macho, while the second brings the Amarok user experience right up to date like any ‘fully connected’ passenger car. A mild facelift to headlamps and bumper mark the updated model out externally, but in other respects the Amarok is basically unchanged. 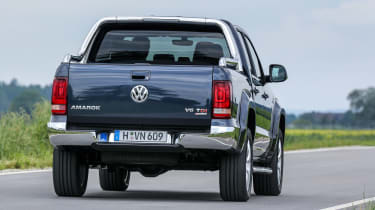 Without the HMRC tax break, it’s doubtful VW would bother offering the Amarok in the UK at all. There are almost no private sales, but the ‘loophole’ benefit for company drivers is huge.

With emissions of 199g/km of CO2 the new V6 Amarok would have a benefit-in-kind tax rate of 37 per cent of its purchase price if it were a passenger vehicle - the same as a 3.2-litre diesel Mitsubishi Shogun. A £32k Shogun will cost a company car driver £2,371 annually as a 20 per cent taxpayer, or £4,741 at 40 per cent. The same 20 per cent taxpayer driving this new Amarok will likely pay just over £600 pounds a year, while the higher rate taxpayer will cough up just over £1,200. That’s a big enough saving over three years to buy the jet-ski and its trailer outright, even before generous company fuel benefit and VAT reclaims for LCVs are factored in.

It’s clear those tax saving will be as interesting to many drivers as how the V6 Amarok performs, although the most powerful 221bhp version we tried has plenty of punch for overtaking and a stump-pulling 550Nm of torque from 1,500rpm for towing or tackling serious 45-degree off-road inclines. 160bhp and 201bhp versions of the same engine are promised to reach us in 2017, but we've not sampled them yet. The higher powered versions get larger disc brakes at both ends, which isn’t a bad idea as the fastest Amarok will sprint from 0-62mph in 7.9 seconds. 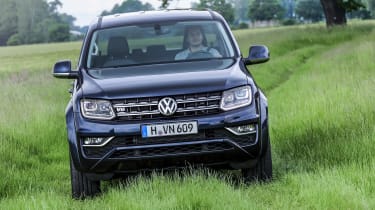 The V6 engine is shared by the VW Touareg and Audi Q7, although the Amarok version is tweaked slightly for greater robustness. It feels effortless and refined on- and off-road operating through a smooth eight-speed auto gearbox, and tyre roar from big alloy wheels is likely to be more wearing over long distances at motorway speeds than engine noise. The interior fit and finish is excellent, including a handsome new fascia design that looks and feels better screwed together than rivals. New front seats offer loads of adjustment, and with full steering wheel adjustment the driving position is more car-like and comfortable than you might expect from a pick-up.

We drove a Euro-only ‘Aventura’ launch edition that had full leather, climate control and VW’s latest 7-inch touchscreen infotainment system. The kind of equipment count should mirror closely the Highline spec that will top the range here and likely account for 80 per cent of sales. UK specs have yet to be finalised, but expect a similar strategy to the current model with Startline, Trendline and Highline trims. Prices are likely to rise by around £750, we’re told, although they’ve not been finalised either. 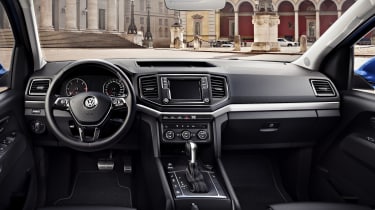 Surrounded by all the luxury in our test vehicle, it was easy to forget the Amarok isn’t an easy-driving SUV, although a hint of rear-end bounce that typifies the pick-up genre was evident even on smooth German tarmac. We already know the hefty ladder-framed Amarok can’t truly match the poise, dynamism or comfort of contemporary road-focused SUVs, but with new V6 muscle many more drivers should find the vehicle rewarding enough for that not to matter. Especially when viewed in the context of the all-important monthly payslip.