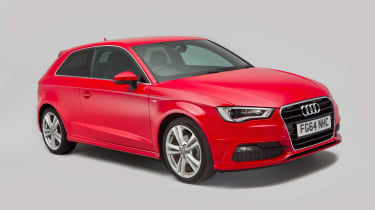 Audi wasn’t the first maker to offer a posh small car, but it was the first to be successful. Until the original Audi A3 arrived in 1996, most contenders in this market were built down to a price. But when the A3 car appeared nearly 20 years ago, it cost as much as many models in the class above.

Things have changed a lot since then, as many of the Audi’s more mainstream rivals like the BMW 1 Series and Mercedes A-Class are significantly more costly, so while the A3 still has the edge on build quality and class, it’s no longer that expensive in comparison.

A used Audi A3 has always been a tempting proposition thanks to its positioning at the head of the Volkswagen Group's family hatchback line-up. While the equivelant Volkswagen Golf, SEAT Leon and Skoda Octavia models have always used the same technology as the A3, the Audi badge ensures extra desirability and better residual values. 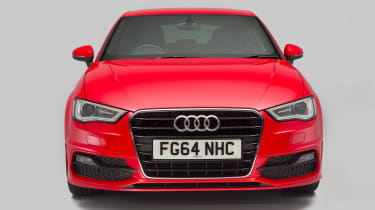 The third-generation A3 arrived in September 2012 as a three-door hatch, with 1.4 TFSI and 1.8-litre TFSI petrol or 2.0 TDI diesel engines. The latter came with front or quattro four-wheel drive, and soon after launch a 1.6 TDI engine joined the range – although both diesels have since been embroiled in the VW Group emissions scandal.

• Read our used Audi A4 review

By March 2013, a five-door Sportback had been added, featuring a 35mm longer wheelbase to give more rear legroom than in the three-door car. A 104bhp 1.2 TFSI engine was introduced in spring 2013, alongside a 60mpg Cylinder on Demand (CoD) 1.4-litre TFSI, capable of running on just two cylinders when cruising.

As all A3 engines are turbocharged, they have plenty of pulling power, while the S tronic twin-clutch automatic gearboxes are just as good as the six-speed manuals fitted as standard on most models. 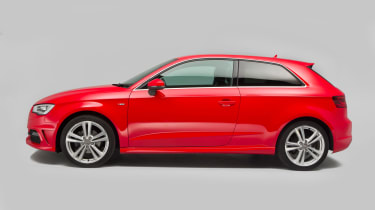 Alternatives to the Audi A3 Mk3

The BMW 1 Series is the Audi’s closest rival in terms of price, size and image. It’s also available with a wide choice of engines and bodystyles, and while prices can be high, supply is plentiful. The Volkswagen Golf Mk7 is another tough adversary; it’s a bit more affordable, yet mechanically it’s the same, although not all of the A3’s engines were offered in the Golf, plus there was no four-wheel-drive option in the mainstream line-up. More affordable still is the Mazda 3, which features sharp styling and generous equipment, but if a premium badge is key, take a closer look at the Mercedes A-Class. 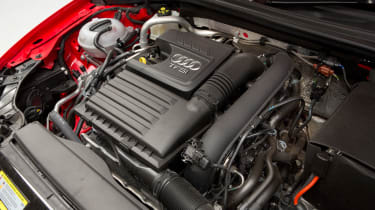 Inside, the A3’s finish and layout are exemplary. But low-spec cars can be sombre. Space is good, although the Sportback is worth having if you use the rear seats a lot. The three-door has a 365-litre boot, or 1,100 litres with the seats down. It expands from 380 litres to 1,220 litres in the Sportback. 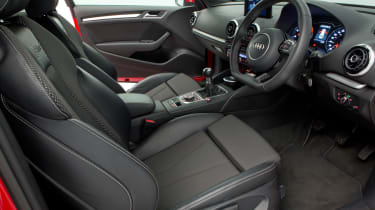 Some early examples of the 1.4 TSFI engine suffered from rattling under acceleration, because of the wastegate actuator rod vibrating.

The screen for the Multi Media Interface control system slides out of the dashtop, but it can creak. The mechanism needs to be lubricated or even replaced. 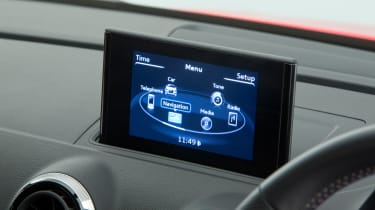 Some owners have had problems with leaking water pumps, leading to the coolant level dropping. Look out for puddles under the car.

The long doors of the three-door A3 improve access to the back seats. But they’re also prone to damage down the trailing edge when opened. 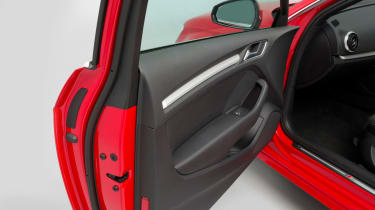 All A3 Mk3s come with variable servicing that allows up to 19,000 miles or two years between checks. Expect each service to cost around £295, or £200 for a 10,000-mile oil change if you prefer annual maintenance. At three years old, an A3 will see its minor service drop in price to £159.

All diesels plus the S3 have a timing belt that needs to be replaced every five years or 75,000 miles. Expect this work to cost £455, or £599 if the water pump is replaced.

Fresh brake fluid is needed after three years then every two years (at £59), while the air-con should be serviced every two years; dealers charge £79 for this to be done. 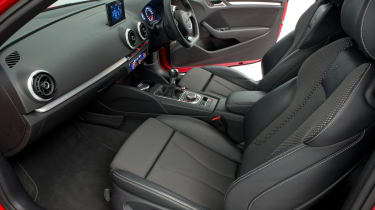 The Mk1 and Mk2 A3 were recalled 14 times. But since the Mk3 arrived three years ago, Audi’s issued just five recalls across its entire range – although most of these affected several models at a time. That was until, of course, the worldwide VW Group recall hit 11 million cars. The Mk3 A3 is one of the models involved in the emissions crisis. Visit the Audi website to see if a potential buy is to be recalled.

After making its debut in 2014’s Auto Express Driver Power satisfaction survey in 16th place, the Mk3 A3 dropped to 27th in 2015 – it was beaten by the Peugeot 308 and SEAT Leon. Sixth for build quality is no surprise, while in-car tech (22nd), performance (26th), handling (33rd) and reliability (36th) are further highlights. 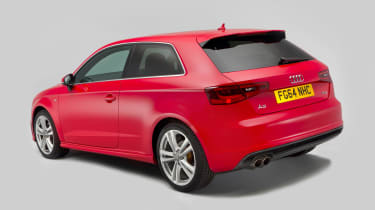 The A3 was crowned World Car of the Year in 2014, while our sister website Carbuyer named it Best Luxury Small Car at its annual awards this year. Carbuyer said the A3 came out on top in its class because of its ability to “demonstrate everything that makes an Audi special” and commended it for offering “a selection of engines that ranges from the very frugal to the very fast”. It also praised the A3 Sportback for being “practical, affordable to run and hugely desirable”. While strong residuals mean the A3 can be costly to buy used, we reckon it’s worth the premium for its blend of refinement, a strong image, build quality and efficiency.