The switch to front-wheel drive hasn’t dulled the 1 Series’ driver appeal – in fact, it’s better to drive than before 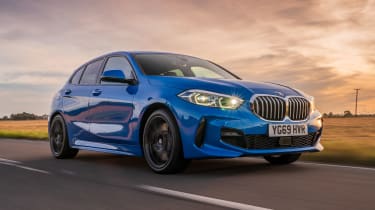 The 1 Series has traditionally been one of the best-driving hatchbacks around – a reputation that BMW is keen to retain for the car’s third generation. The latest car shares its underpinnings with a number of existing BMW products, including X1, X2 and 2 Series Active Tourer – all good cars to drive in their own right. The 1 Series brings lighter weight and a lower centre of gravity to the mix, with its chassis tune geared towards driver involvement. BMW itself describes the 1 Series as a 'Sports Hatch' and this doesn’t feel too far off the mark.

Generally, all the hallmarks of modern BMW products are present and correct. The 1 Series boasts accurate, well-weighted steering, powerful brakes and an inherent balance to its chassis that inspires confidence while providing a comfortable – if slightly firm in M Sport models – ride. There’s loads of mechanical grip too, both in front and four-wheel drive models. At normal to high road speeds, most drivers won’t even notice that the 1 Series isn’t rear-wheel drive.

The 118d is set to be the most popular model and those who take the plunge are unlikely to be disappointed. The engine pairs really nicely with the 1 Series’ poised chassis; its a package that combines to make BMW’s smallest, front-driven car feel much like the excellent, rear-wheel drive 3 Series from behind the wheel. 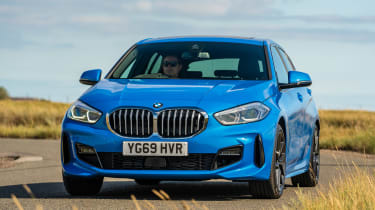 The high-performance M135i – a direct rival for the Volkswagen Golf R and Mercedes-AMG A35 – is impressively fast and delivers its performance effortlessly, but it’s not quite as characterful as rivals like the Honda Civic Type R; a flat engine note belies the car’s punch. It’s more than a match for the aforementioned German rivals, however – buckets of mid-range torque work well with the clever four-wheel drive system to make short work of twisty tarmac.

There are two petrol engines and three diesel engines to choose from, with the majority being offered with a six-speed manual gearbox as standard, or an eight-speed automatic as an option.

The 118i kicks off the range, powered by a 138bhp turbocharged petrol engine. Performance is peppy, with 0-62mph taking 8.5 seconds regardless of gearbox choice. For now, this is the only non-performance petrol offering in the range. 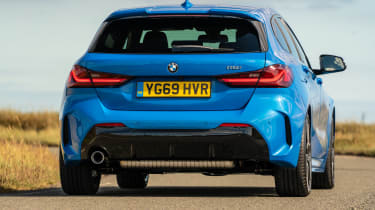 The most powerful diesel engine is found in the 120d, producing 187bhp from its 2.0-litre unit. Four-wheel drive is standard with this model, aiding traction off the line for a 0-62mph sprint of seven seconds dead.

The fastest 1 Series in the range is the M135i; its 302bhp 2.0-litre engine and standard four-wheel drive are enough for a 0-62mph sprint of just 4.8 seconds – enough to give the Volkswagen Golf R a run for its money.