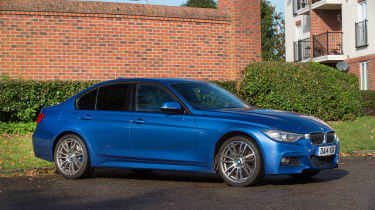 There are cheaper family cars and some offer more practicality, but if you’re looking for a car that majors on image, build quality and a brilliant driving experience, the BMW 3 Series might well be the choice for you. Efficient engines mean you get power without crippling fuel bills, and if you buy a model with xDrive, you’ll have driving security all year round. In 2014 the 3 Series won our Best Compact Executive Car title for the sixth time in a row, because “it combines invigorating driving dynamics with low running costs, a decent dose of practicality and bags of upmarket kerb appeal”. While the BMW might seem costly, spend time with one and you’ll see why it’s actually fine value.

BMW launched the original 3 Series way back in 1975. In those days it was an expensive car made in relatively small numbers, and the first-generation version came in two-door saloon form only; there was no estate, coupe, convertible or a four-door saloon.

In the intervening four decades the model has become a big seller in the UK; such is its popularity that it now outsells the Ford Mondeo.

So while the 3 Series may no longer be exclusive, it’s more desirable than ever thanks to BMW’s attention to detail when it comes to engineering and build quality. Yet plentiful supply is also matched by steady demand, so while there are lots of 3 Series to go round, their prices remain high. 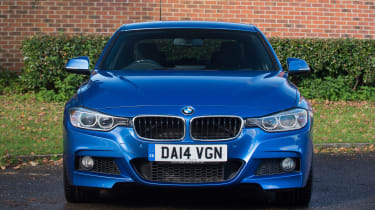 The sixth-generation BMW 3 Series saloon was launched in the UK in February 2012. Codenamed F30 by BMW, it came in 328i, 335i and 320d specs. A 330d model appeared in July, alongside a hybrid (the ActiveHybrid3), and from this point a 320i was also introduced with xDrive four-wheel drive.

The 316i and rear-wheel-drive 320i EfficientDynamics joined the range in November 2012, both powered by a turbocharged 1.6-litre petrol engine.

A facelift in July 2015 brought styling tweaks, LED headlights, new engines and an upgraded cabin to the range. A year later the 330e plug-in hybrid replaced the ActiveHybrid3 variant.

There are no engines or transmissions that we’d suggest you steer clear of, because they’re all great to use. The more powerful motors are especially desirable and they’re only thirsty if you use the available performance. What tends to be expensive is the servicing, although independent specialists can help cut maintenance costs here. 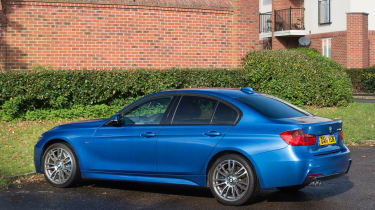 Alternatives to the BMW 3 Series Mk6

The closest rival is the rear-wheel-drive Mercedes C-Class. It’s not as much fun as the BMW, but it’s superbly built, reliable and comes with a cast-iron image, although prices tend to be high.

The Audi A4 is sold in front or four-wheel-drive forms, with AWD cars being especially well suited to towing. The Jaguar XE is a newer rival to consider, but used prices are coming down. The semi-premium Volkswagen Passat is also worth a look, as is the Mazda 6.

A software update should help if you are struggling to integrate your smartphone via Bluetooth. 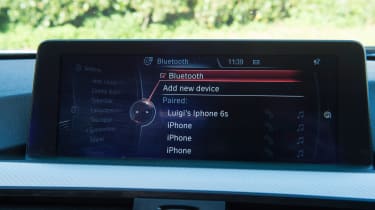 The front seat frames can corrode, leading to squeaks from the hinges and the adjustment mechanisms.

A digital odometer means it’s possible to clock a 3 Series, although the correct diagnostic tool will soon uncover this.

BMW produces some of the best interiors around, and the 3 Series’ cabin is no exception. With supportive seats, flawless build quality and excellent ergonomics, any journey is a breeze. Boot capacity isn’t bad, either, with 480 litres of space, while an optional folding rear seat boosts practicality. The Touring estate can stow up to 1,500 litres, or 495 litres with the back seats in place. 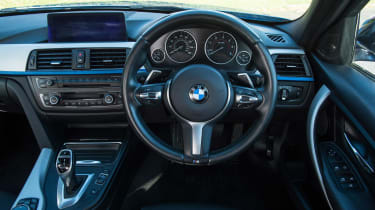 All 3 Series models have variable servicing, so the car flags when work is needed. The system takes into account the condition of a wide range of items, but only parts that need replacing will be renewed, so no two service costs are the same. Check-ups are typically needed every 18,000 miles or two years, though.

A five-year/50,000-mile service package has always been available with the Mk6; without this a typical check-up costs £140 to £360. The brake fluid should be renewed every two years (£71). All engines are chain-driven, so no fresh timing belts are needed.

The Mk6 has been recalled four times so far, the first in July 2013 due to the possibility of clutch failure. The next campaign came in January 2015 because of faulty seatbelts, while fuel starvation leading to the engine stalling led to the third recall, in June 2015.

BMW’s most recent action was launched in October 2016, because of glitches in the electric power steering in a small number of 3 Series models.

A result of 25th in our Driver Power 2017 used car satisfaction survey put the 3 Series ahead of the VW Passat Mk7 and Audi A4/A5. Owners praise the driving experience, safety and infotainment, but are less enamoured by the running costs and practicality. Reliability doesn’t score as strongly as you might expect, either.