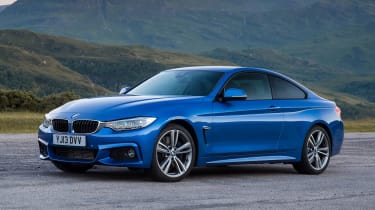 We were really impressed when we first drove the BMW 4 Series, loving the attention to detail with the cabin design and ergonomics, the build quality and the driving experience. That first drive was of the range-topping 435i Coupé; when we got behind the wheel of the Convertible soon after, it was clear that the two bodystyles are quite different to drive. The Coupé feels sportier, while the Convertible is more of a cruiser. Yet with the roof up, the open car is just as refined as the closed one. Whichever 4 Series you buy, you’re bound to love it. However, the array of engines, trim levels and options available is bewildering, so try a few different combinations before parting with your cash in order to pin down the model that’s right for you.

With the first two generations of BMW 3 Series, the two-door model was a less practical saloon rather than a stylish coupé. When the third-generation 3 Series appeared in 1990, the two-door car was pitched as a sleeker, premium model, so it was now a proper coupé.

BMW stuck to this formula for the next two generations of 3 Series, but for the Mk6 car there was a significant change: the 3 Series morphed into the 4 Series. As before, there were coupé or coupé-cabriolet models powered by efficient four or six-cylinder petrol or diesel engines. Here’s how to buy the right 4 Series. 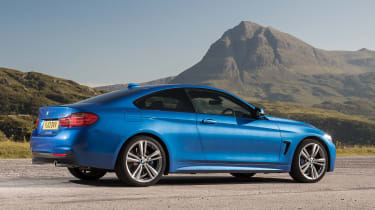 A facelifted 4 Series was launched in February 2017 with a new nose, more paint options, an upgraded interior, LED headlights and recalibrated suspension.

None of the engines is weak, but the six-cylinder units have a gorgeous soundtrack that’s absent from the four-cylinders, which still offer better economy and enough power for everyday driving.

Alternatives to the BMW 4 Series

The closest rival is the rear-wheel-drive Mercedes C-Class, which features a wide choice of engines and comes in Coupé or soft-top Cabriolet guises. It isn’t as much fun as the BMW, but it’s superbly built, reliable and has a cast-iron image, although used prices tend to be high. 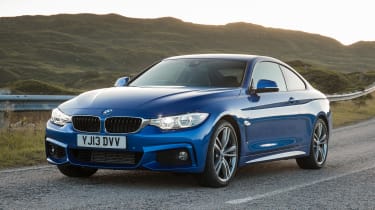 The Audi A5 comes in front or four-wheel-drive forms, the latter massively improving usability in the winter. As with the BMW, you can take excellent build quality, practicality and efficient engines for granted. The Audi TT is offered in Roadster or more practical hatchback variants, while the Volkswagen Scirocco comes only as a very usable hatchback.

There’s no need to carry a spare wheel, because all 4 Series models come with run-flat tyres.

Drive Performance Control is standard; it adjusts the throttle response, steering and suspension. 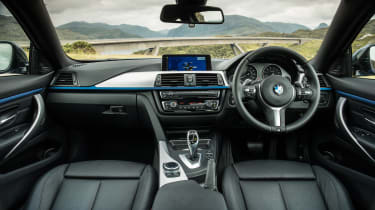 Those in the front of a 4 Series get the best seats. They’re supportive and have plenty of adjustment, plus there’s lots of head and legroom. Anyone under six feet is fine in the rear, but only if those in front aren’t tall, or are considerate with their seat positions. The car seats only four, but boot space isn’t bad, at 445 litres, although the cabrio cuts this to just 370 litres.

The 4 Series has variable servicing, so the car flags up when it needs attention. No two check-ups cost the same, but they’re typically every 18,000 miles or two years.

An oil change is £179 to £215 depending on model; a full service with filters is £411 to £561. All engines are chain-driven, so there are no cambelts to renew. The coolant never needs replacing. The brake fluid should be refreshed every two years, at a cost of £93. 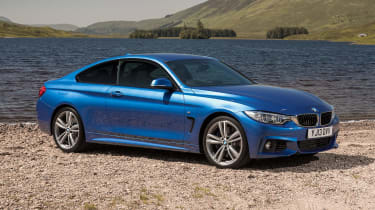 There have been six recalls for the 4 Series. The first came in January 2015 to deal with seatbelt concerns. The engine stalling and the rear axle working loose prompted action in June 2015 and October 2016.

In December 2016 a campaign started for possible electric power steering faults. The most recent recalls, in January and September 2017, related to glitches with the airbags and front seat securing mechanism respectively.

The 4 Series was 54th in our Driver Power 2018 satisfaction survey. Owners were most impressed by the car’s connectivity, ranking it in 22nd place here, and the BMW scored well for its low running costs. After that the car did surprisingly poorly, with disappointing scores for reliability, exterior finish and, incredibly, ride and handling.