REVA G-Wiz - the worst cars ever

The term ‘car’ is being generous to the G-Wiz. It had the performance of a sleepy vole and the structural integrity of your slippers 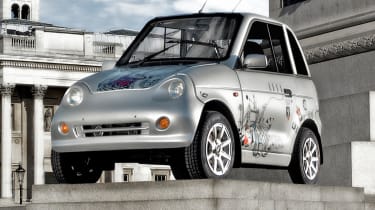 With all the votes counted, it was a narrow victory for the G-Wiz electric car, if you can call it a win. Or even a car, for that matter.

The Indian-built model actually qualifies as a quadricycle in the UK, so you can drive it if you've only passed your CBT motorcycle test, and you can get behind the wheel from 16 years of age, too. Unfortunately, the G-Wiz will earn you zero street cred when compared to anything you can ride on two wheels.

The G-Wiz was built at Reva's factory in Bangalore, India, from 2001-2012, but quality control wasn't exactly to Audi standards. The bug-eyed front end and tall, flat panes of window glass make it look awkward, while the variety of crooked shut lines on every model and mismatching paint finishes meant no two cars left the factory looking the same. If you were really unlucky, the G-Wiz would leave enough of a gap between the bodywork and doors to let the rain in, too.

Reva claimed that there was room for two adults and two kids inside, but you'd be packed in like sardines and the electric motor would probably succumb to the challenge of hauling the extra weight. The original DC motor boasted a heady 13kW of power, which is about as much as you'll get from the average starter motor today, although as the basic G-Wiz weighs around 600kg, the electric motor could just about cope with one person on board.

Early cars had six conventional lead acid batteries under the seats, giving the G-Wiz an official range of 50 miles. In reality the battery would be spent long before then, especially if you had tried to attain the G-Wiz's faintly terrifying 50mph top speed.

An upgrade to an AC electric motor and better batteries meant more consistent charging for later models, although even better was the addition of disc brakes up front. Yes, that's right, while the old G-Wiz could accelerate briskly enough, drum brakes made an absolute meal of stopping in a timely fashion.

Having said all that, the real problem with the G-Wiz was the comparative lack of safety it delivered. It was only after 2008 that it had any semblance of a crash structure, developed with the help of Lotus, but even then, the G-Wiz was a potential rolling coffin at any speed over 30mph - a motorbike may be unsafe, but at least you have the option of stepping off to avoid an accident, with the G-Wiz, you're stuck.

It's no surprise that the G-Wiz found favour as a city car, and it was a hit in London in particular. Amazingly, it was the best-selling electric car in the world up to 2009. But then major manufacturers finally came on-stream with their own electric models, and instantly consigned the G-Wiz to the worst cars of all time charts, where it’s safer for everyone.