Best car videos 2018 - watch our video highlights of the year

Our top 10 most popular videos of 2018 ranked. Find out which one takes top spot. 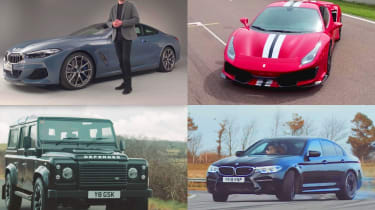 Here at Auto Express we pride ourselves with bringing you the very latest from the world of motoring, whether online, in print or a video. 2018 has been a vintage year for all three but a particularly golden era for the latter.

Our videos have racked up over 22 million views this year on our Youtube channel and were watched for over 56 million minutes. Even amongst this mountain of great video content, however, some films stood out and here we’re celebrating our top 10 most popular videos of 2018.

We’ve ranked the videos by the number of views they’ve received in 2018 alone so it’s a great indication of what’s been hot on the Auto Express website and YouTube channel over the course of the year. For more great free videos remember to subscribe to Auto Express on YouTube now…

When the Land Rover Defender ceased production back in 2016, it was a sad day for the motoring world. Realising this, it was brought back briefly this year to celebrate the 70th anniversary of the firm. Land Rover launched a run of limited edition Defender models. However, unlike a Jaguar D-Type or E-Type Lightweight, the 2018 Works V8 70th Edition isn’t a brand-new continuation model, instead it’s a heavily re-engineered ‘old’ Defender. We drove it around the British countryside to back in March to see how the V8 had changed things.

The BMW M5 and the Mercedes-AMG E 63 S are the cream of the crop when it comes to supersaloons: the former churns out 592bhp and 750Nm of torque, while the latter has 604bhp and 850Nm at its disposal. And with both costing just shy of £90,000, these two rivals couldn’t be closer. We decided to try and find a winner the only way we could. By taking them both down to the track and thrashing them around. Honestly, this was very serious work.

Whether you call it a Mercedes G-Class or a G-Wagen, there is no denying that it has become an icon of its time. Having been on sale for 38 years, 2018 saw the G-Wagen get a makeover. However unlike most new models, this new G-Wagen has kept an almost identical look to the old car yet only five small parts have been carried over from the outgoing one. We tested one to see whether dragging it into the 21st century had ruined this 4x4 icon.

The BMW 8 Series has returned to the German firm’s lineup after a near 20-year absence. A two-door coupe will be the first of three body styles that will make up the range, which will grow to include a convertible as well as four-door Gran Coupe by the end of next year. Auto Express was invited for an exclusive preview of the new two-door coupe, which is on sale now. But could it really challenge sports cars like the Porsche 911 and luxury GTs like the Mercedes S-Class Coupe. We drove it later that year to find out.

The Ford Focus is one of the all time great cars (the last generation was the third best selling car in the UK) so every new version is met with equal amounts of excitement and trepidation. We were lucky enough to be given a first look around the new Mk 4 Focus when it was revealed. The styling is quite a departure over the old car and received mixed reviews.  The interior also got a fresh new look including an eight-inch touchscreen that controls the vast majority of the car’s functions.

The Ferrari Portofino was the replacement for the outgoing, and frankly unloved, California T. The ‘baby’ Ferrari upped the ante over the old car with more power, a new, lighter chassis, and aggressive looking, more aerodynamic bodywork. Under the bonnet sits the same 3.9-litre turbocharged V8 engine found in its predecessor, though Ferrari tweaked it with new components and recalibration of the engine management software so that it produces an extra 40bhp, giving a total of 591bhp.

We went to Italy to drive the hard-core Ferrari 488 Pista in July. The 488 Pista is the newest addition to Ferrari’s illustrious special series mid-engined history. From the 360 Challenge Stradale to the 430 Scuderia and 458 Speciale, all three enhanced the performance on offer in the standard cars of the time, but even by Ferrari’s standards, the 488 Pista is something else, as we found out.

SUVs have continued to rise in popularity, with premium SUVs proving to be one of the car industry’s biggest cash cows at the moment, which explains why Mercedes, Audi and BMW appear to be so obsessed with them. The current market is awash with conventional SUVs from every corner of the market. However a trend for high-riding cars with more svelte designs to appeal to a younger audience has appeared And that’s where BMW’s latest model, the X2, comes in. We drove it at the start of the year to see whether or not the coupe-SUV niche really needed to be filled.

Volvo has upped their game in recent years and can now be spoken about in the same breath as Audi, BMW and Mercedes. Led by its excellent SUV range and backed up by the S90 saloon and V90 estate, the Swedish brand now has the style and substance to go toe-to-toe with any of its premium rivals.  In May we got to drive its new compact executive estate, the V60, to see if it carried the same standards as the rest of the Volvo range.

The new MINI received a subtle facelift earlier in the year which saw the addition of new headlights and DRLs, while at the rear it was fitted with Union Flag LEDs which are standard for the UK. 3D-printed nameplates and dash trims could be specced now and the expansive use of chrome can now be toned down too. We drove it in April to see whether or not the MINI facelift was more than just cosmetic.

Which was your favourite video from 2018? Let us know in the comments section below...