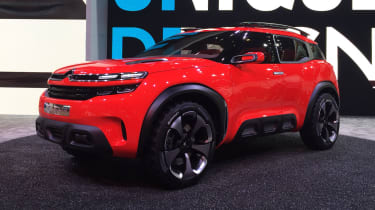 Thanks to its booming new car market, China is an important place for the world's car manufacturers. That's why they've chosen the Shanghai Motor Show to reveal a host of exciting new concept and production cars to the world.

The Shanghai Motor Show was once a small, insignificant show for British car buyers, but that's all changed now. Cars being unveiled at the 2015 Shanghai show will have a direct impact on our domestic car market either now or in the years to come. Here are our picks of the best cars that were revealed at the show.

My undoubted star of the show, the Aircross shows exactly what Citroen boss Linda Jackson meant when she told us: “We’ll have the spirit of the Citroen Cactus in every one of our future models”. The Aircross is big in the flesh, at 4580mm long, 2100mm wide and 1800mm tall – if it were to make production in this precise form, it’d be a rival for the Land Rover Discovery Sport.

Instead it’s used to preview a slightly smaller, VW Tiguan-sized Citroen SUV that we may see as soon as 2017. In fact, Citroen’s chief designer Alexandre Malval hinted that there were inferences from the design of the forthcoming SUV shown on the Aircross.

But while the chunky exterior wowed the Shanghai crowds, with its clever reinterpretation of the Cactus’ airbumps at the bottom of the doors, it was the interior that most impressed me.

From the Charles Eames-chair inspired seats with microphones and speakers in the headrests to the twin 12-inch screens on a floating dash, which Malval describes as “the most important element of the interior of a modern car” and “like a piece of furniture”, the Aircross’s interior proved that Citroen can take the style and minimalist approach of the Cactus and apply it to something more upmarket. There are exciting, Cactus infused, times ahead for Citroen. 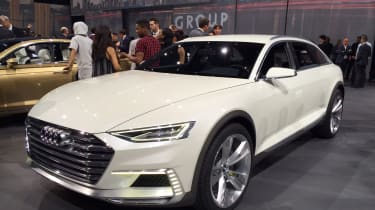 We’ve seen Prologues before, giving a glimpse into new Audi designer Marc Lichte’s future for the brand, but this is the first time a Prologue has ventured off-road. Under the skin is a 724bhp petrol-electric powertrain, but what impresses most about this concept in the flesh is the quality to the finish.

Concept cars used to be thrown together and cordoned off from the media masses and general public for fear of the flakey build quality reflecting badly on a brand, but Audi was happy for us to get up close and personal with this Prologue as with all others. And it’s up close that you really get to admire the sharp lines, the perfect detailing of the car’s ‘jewellery’ and the immaculate fit and finish of this concept. The interior isn’t too far away from reality, either.

The new Q7 and forthcoming A4 and A5 models may not be Lichte’s work, but I get the feeling Audi design will be back on track when his work starts to hit the streets. 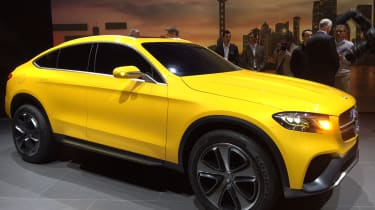 This is the year of the SUV for Mercedes, with the brand previewing another new SUV – this one a C-Class based BMW X3 and Range Rover Evoque rival to replace the GLK – in coupe form before we see the bigger-selling standard five-door.

The GLC Coupe concept is a direct rival for the BMW X4 and to my eyes a more successful attempt than the BMW at defining yet another new niche – the mid-sized coupe SUV. The bold, bluff front end is slightly more successful than the high-set rear end while there’s a V6 petrol engine under the bonnet – exactly the sort of powertrain that currently suits the still rapidly-growing Chinese home market. 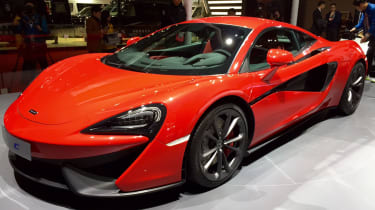 The new ‘entry-level’ McLaren Sports Series model made its debut in Shanghai and looked sensational in a fabulous deep metallic red colour scheme with contrasting black features, including the wheels.

McLaren reckons this 533bhp, £126,000 model will account for around 20% of Sports Series sales and help to appeal to those who don’t necessarily have the ready cash for a serious sports car, but need to buy on finance – there’ll be a PCP package available through a new finance partner for just those buyers.

This is no stripped out model, though, with a beautifully trimmed cabin including the upmarket features you’d expect at the price and 0-62mph performance of 3.5 seconds. However, once you delve into the options list, you could well start getting perilously close to the already better-equipped and more powerful £143,000 570S model. 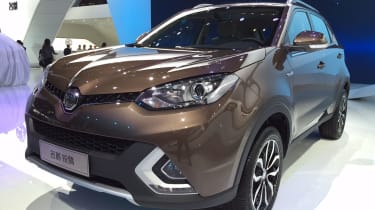 We’ve already spied it being tested in the UK and the wraps came off the GS at the Shanghai show for the home market. It’s Nissan Qashqai-sized, but you can bet it won’t be Nissan Qashqai priced when it goes on sale in the UK next year.

It’s a smart and sizeable SUV when you see it on the road, too, while front or four-wheel drive versions will be available and diesel power in the UK. Let’s hope that some of the recent quality improvements we’ve seen on the latest MG6 models come through on the MG GS, too. 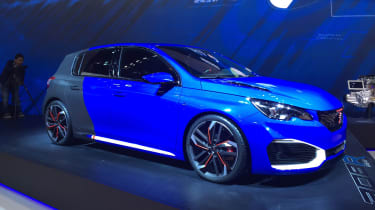 It’s an interesting time for Peugeot, with sister brand Citroen having a renaissance with a new sense of style and value, and DS proving that the French could possibly mount a decent challenge on the premium car market. But while Peugeot boss Maxim Picat told us that Peugeot will stick to its core products – the ones that sell most and bring in the most revenue – there’s still room for dynamic models.

So although he confirmed once again that the RCZ will die, the 493bhp, four-wheel drive plug-in hybrid could well become reality. Developed by Peugeot Sport, Picat said: “We are quite well developed with this car, we’re now in the process of commercialising it”.

Before then, we’ll see a Peugeot 308 GTi, with Picat positioning Peugeot alongside DS and Citroen by saying, “Peugeot is the sporty one. Step by step you’ll see it. The GT-Line and GT models already account for 22% of 308 sales in Europe, then we’ll have another hot model and then maybe the Hybrid R.”

See all the latest news from Shanghai on our full round-up page.