Typically stylish, quick and cheap to run, the MINI electric will put a smile on your face - although the limited range spoils the fun.

MINI hasn’t wavered from its core values in delivering the new Electric model. It remains fun to drive, with lively performance and a classy image, while the all-electric powertrain just adds further value to the iconic small car.

The limited range might put off some customers, but the real challenge to sales success for the MINI Electric will come in the form of close retro rival, the Honda e. Both are similarly priced and will travel roughly the same distance on a single charge. But, great design so often wins the day, and it’s a tough choice between the quiet cool of the MINI, or the funky, tech-laden Honda e.

About the MINI Electric

The original MINI was created in 1959 as a response to the global oil crisis. Designer, Alec Issigonis, was charged with producing a small car that created maximum space with minimal dimensions, had room for four people, was good to drive and delivered low fuel consumption. We think it’s safe to say he succeeded.

While ownership of the brand has certainly had its highs and lows, it was in 2001 that a new BMW-owned MINI generation was unveiled, leading to the success story we know today.

Now, it’s the turn of the MINI Electric. However, the three-door hatch won’t have it all its own way. The market for small fully-electric cars is growing rapidly, as more people seek cleaner alternatives for their urban driving needs. 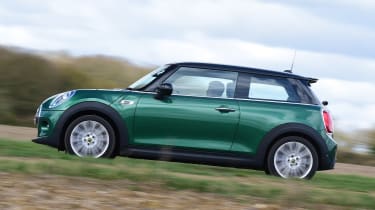 Trailblazers such as the Renault Zoe and Nissan Leaf have grown in popularity and led to other manufacturers launching their own take on a small EV. Hyundai has produced the Kona Electric SUV, while Kia uses the same battery and motor to power its e-Niro, another compact SUV design. In the supermini space, Peugeot’s e-208 also shares a lot of PSA-group tech with the Vauxhall Corsa-e model and these, along with the Honda e and new electric Fiat 500, will be key rivals for the MINI Electric.

With the MINI Electric range starting from £24,900 (including the £3,000 government grant), it undercuts the entry-level Honda e by around £1,600. There are three trim levels to choose from: Level 1 is generously equipped with 16-inch alloy wheels, LED headlights, sat-nav and cruise control. The mid-spec Level 2 trim adds 17-inch alloys, heated seats and a rear view camera, while the top-of-the-range Level 3 includes a panoramic glass sunroof, a head-up display function and an upgraded Harman Kardon audio system.

There’s only one power option for the three-door Mini Electric - a 32.6kWh battery powers a single electric motor, producing a total of 181bhp and a 0-62mph time of 7.3 seconds.

As ever though, the question EV customers have to ask themselves is whether their car will fit seamlessly into their daily lives, and the slightly underwhelming range of up to 145 miles may put some off.