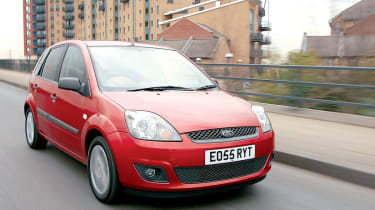 “Quite good, but could be better. Unless you drive really carefully, the quoted mpg can't be achieved. Front bumper is loose, but this seems to be normalon the car.”

“Car is quite good but could be improved, quoted combined fuel consumption can be achieved with extremely careful driving, go a little quicker and the consumption drops. Front bumper is loose but this seems to be normal with this model car.”

“This is the fourth Fiesta I’ve owned including one Mk1 and two Mk3s and it's the best by far. Despite the usual new car teething problems it's exceeded my expectations.”

“With its 1.4-litre engine it does not have masses of power, however it can easily keep up with most things down country lanes and does provide driving thrills and takes a lot to come unstuck through corners, it is a 3 door and I think has more than practical.”

“Pleased with car but let down by dealer's inability to fix things in one attempt. It has taken seven visits to get satisfaction.”

“Practical every day car but not as efficient to run as you would expect for a 1400cc engine, otherwise carefree motoring. This car is a second car only used for to and from work shopping etc.”

“I like the ride, not too hard, and the economy. It seats four in comfort, but the boot is not really big enough for luggage for four.”

“Although it doesn't live up to the combined consumption figures (it only manages around the quoted urban figure!) on a whole the car has many things I am looking for. It is despite my grievances lighter on my wallet to run on diesel, it has enough go in it for me and it looks good too! The two things that let the car down are some dodgy parts falling off and the time it took to repair the car when it broke down on me – it was one day old!”