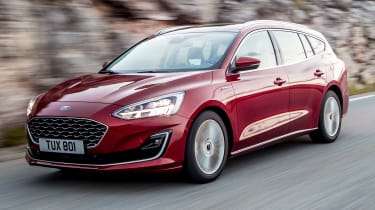 The Ford Focus Estate is the first choice for enthusiastic drivers, as it shares the class-leading handling characteristics of the hatchback version. In fact, although the two have different suspension set-ups you’ll struggle to tell them apart from the driving seat.

The estate uses a more sophisticated suspension set-up than entry-level hatchback models, and its independent rear end is configured more like the sporty Focus ST-Line. You can also opt for Continuously Controlled Damping (CCD) on higher-spec models, which constantly tweaks the suspension responses as you drive. 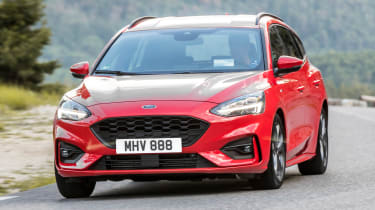 Crisp electrically-powered steering and an agile chassis mean the car responds nimbly to changes of direction, while the ride quality is supple over all but the sharpest of bumps.

The manual gearbox is pretty slick, and the eight-speed auto is generally a smooth performer, although it’s not quite as seamlessly impressive as the DSG box in rival VW Golf models.

Active models ride higher 30mm higher than the standard car. There's a little extra body roll through corners as a result, but the ride quality is slightly plusher; the Focus Active surprises by being fun to drive on country roads an an effortless cruiser on the motorway.

There’s a strong range of petrol and diesel engines on offer with the Focus Estate. Petrol power comes from the 1.0-litre EcoBoost engine, available either in standard 123bhp form, or versions with 48v mild-hybrid technology producing 123bhp and 153bhp. The lower-powered cars use either a six-speed manual, or eight-speed auto transmission. The 153bhp version is offered solely with the manual 'box and is the quickest in the core 1.0-litre range, achieving 0-62mph in 9.4s and a 130mph top speed.

The sporty 2.3-litre ST model delivers its 280bhp via a six-speed manual or seven-speed auto gearbox and manages the 0-62mph sprint in 5.8s and 6.0s, respectively.

The 1.5-litre and 2.0-litre EcoBlue diesels, produce 118bhp and 148bhp, respectively, and all are fitted with a six-speed manual gearbox as standard. An eight-speed auto is offered as an option. The manual 148bhp variant is unsurprisingly the fastest sprinter of the bunch, with 0-62mph dispatched in 8.7s.