We asked you what your favourite car design is for 2016, and the Honda Civic Concept has taken the crown 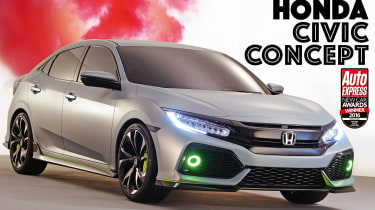 Honda is on a roll at the moment. Over the past year it has launched the scorching hot Civic Type R, plus it has finally pulled the wraps off its eagerly awaited NSX supercar. Yet the good news doesn’t end there, as the brand’s exciting Civic Concept has scooped our coveted Design Award.

Voted for by you on autoexpress.co.uk, the sleek Civic beat 14 contenders, including glamorous models such as the Alfa Romeo Giulia and Mazda MX-5 RF. That’s a big result for a car that’s essentially a humble family hatchback.

You see, look past the Concept tag and wildly oversized wheels, and this star of March’s Geneva Motor Show is essentially a thinly disguised version of next year’s all-new production Civic. That’s great news for buyers, as the blend of bulging curves and sharply defined creases gives the Concept a muscular stance that few other family five-doors can match.

More importantly, the newcomer ditches the rather awkward design cues of the current Civic in favour of a more handsome and cohesive design. For instance, the fussy split tailgate is replaced by a more conventional item, improving both the looks and visibility for the driver.

That’s not to say there aren’t some bold design flourishes. At the front is a pair of LED headlamps integrated into the grille in the same way as the NSX’s, while the bold shoulder line and wide wheelarches give the car plenty of aggressive kerb appeal. It certainly bodes well for a possible Type R hot hatch version.

Honda has spent just as much time on the interior, with snatched glimpses of prototype models revealing a mix of premium design cues and top-notch materials.

We’ll have to wait until late next year to see if the Civic drives as well as it looks, but on the evidence of the Concept this Honda hatch promises to be one of 2017’s most exciting cars. 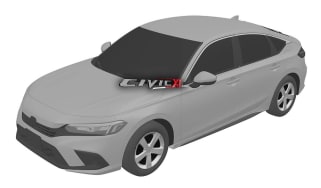