Significant changes to the design, tech and chassis of the Lexus NX compact SUV are designed to help strong sales continue. 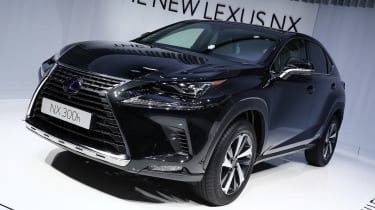 This is the facelifted Lexus NX, a new version of the Japanese luxury brand’s UK best-seller, which has made its European debut at the Frankfurt Motor Show.

Lexus shifted just over 4,000 examples of the NX in the UK in 2016, helping the firm’s British dealers to their strongest year since 2007. So the changes to the car are relatively modest as the firm hopes to build on this progress. Lexus sources say the revised NX will go on sale in the UK just before the end of 2017.

The NX’s exterior gets a revised front grille and new front bumpers that blend a bit more naturally into the bonnet and front wings and doors, along with new satin and smoked chrome trim elements. The car’s exterior designer, Shin Kamiura, says the front has a “stronger and more aggressive presence”. 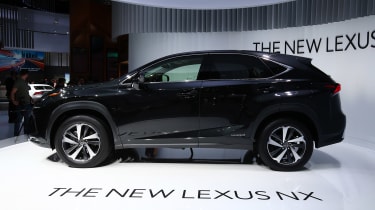 The rear gets a lower, wider bumper to improve the NX’s stance, and revised tail-lights that incorporate ‘L’-shaped lenses more effectively. There are also larger chrome-tipped exhausts, an underbody spoiler and two new designs of 18in alloy wheels.

The cabin has a number of updates, including a larger central dashboard screen (up from seven inches to 10.3 inches), simpler and less cluttered controls for the air-con and heating, and a new design of analogue clock.

Lexus’s remote touchpad has been made larger, and it gets a reshaped palm rest to improve wrist comfort, while the wireless phone charging tray has also grown, to reflect the trend towards larger smartphones. Lexus has also integrated the head-up display into the top of the instrument panel, so cars with this feature have a smooth dash that’s identical to non-HUD models.

Other new features include heating controls for the rear-cabin occupants, metallic satin finish on many of the key switches, and a sensor under the rear bumper that allows you to open the rear hatch by waving your foot underneath the car.

Under the skin, the NX’s powertrain remains broadly the same. The non-hybrid NX 200t will continue to be offered with its four-cylinder turbocharged petrol engine, but Lexus says its badge will change to become simply NX 300 - a reflection, the firm argues, of the adoption of turbo motors in other models in the range. The bulk of sales will continue to be taken up by the hybrid NX 300h, however, and this car’s hybrid set-up - a mix of electric motors and a 2.5-litre petrol engine - is unchanged. 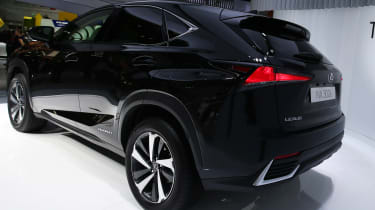 Lexus has taken the opportunity to tweak the NX’s chassis, though. The springs, anti-roll bars and bushes have all been revised in a bid to improve turn-in and keep the car flatter during cornering. There’s a new spec of shock absorber, too - but the biggest tweak is the introduction of Adaptive Variable Suspension, first seen on the LC 500. It monitors the position of all four wheels and uses up to 650 different compression and damping adjustments to improve handling stability and deliver different modes depending on the driver’s mood.

Other tweaks include improved sound deadening, and the addition of Lexus’s Safety System +, which brings in dynamic radar-based cruise control, lane departure alert, automatic high-beam headlights and a pre-collision system.

Will these 2017 changes help the Lexus NX keep pace with premium compact SUV rivals? Give us your view in the comments…