The diesels are strong, but while the non-turbo petrol engines perform well, they’re probably too revvy for this class 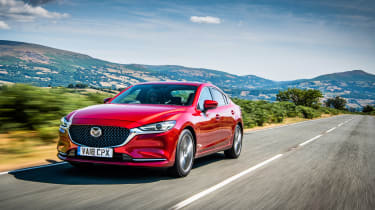 From the company that makes the marvellous MX-5 roadster, you’d hope the Mazda 6 would be a sporty and satisfying car to drive. And you won’t be disappointed. In giving it a driver-focused character, Mazda has built something that feels more agile than any crossover of SUV – although mindful of its market, this doesn’t mean compromise elsewhere.

A criticism of earlier examples of the Mazda 6 was that the ride was perhaps a bit too firm and sporting. But far-reaching detail revisions in 2015 cured this for the mainstream versions: now, it’s only the Sport Nav that has a taut ride, which means it can fidget around town over bumps and potholes, but does still smooth out at speed.

The benefit of this sporty suspension is excellent handling across all versions of the 6. Turn-in is sharp, there’s plenty of grip (particularly with the Sport Nav’s 19-inch wheels) and feedback through the steering is accomplished. The 6 is a great driver’s car and owners seem to really rate its talents behind the wheel.

Mazda's 2016 update for the 6 included an innovative new system called 'G-Vectoring'. Essentially, it subtly adjusts torque delivery according to steering angle with the aim of providing a more stable and comfortable driving experience - different to more grip-focused torque vectoring systems. While various graphs and videos by Mazda show it working, we were unable to really detect it from behind the wheel - although it could benefit passenger comfort on long drives.

The only omission in the Mazda 6 engine range is a truly sporty engine to make the most of this talented chassis - the closest you'll get is the 2.5-lite four-cylinder introduced with the 2018 update, which has 191bhp, although that's still not enough to overpower the chassis.

Two engines form the core of the Mazda 6 range: a 2.0-litre SkyActiv-G petrol and 2.2-litre SkyActiv-D diesel. Both are offered in two power outputs: the petrol with 143bhp or 162bhp, and the diesel with 148bhp or 181bhp. Both are in-house Mazda designs not shared with any other car maker.

The SkyActiv-D engines are easily the most popular. They have an unusually low compression ratio for a diesel, which is good for efficiency and emissions: Mazda prefers this approach with a slightly larger capacity than the 2.0-litre engines of many rivals.

The regular SkyActiv-D 150 diesel produces 148bhp and 380Nm between 1,800rpm and 2,600rpm. It takes the car from 0-62mph in 10.0 seconds and on to a top speed of 131mph, and is a very well rounded engine with a smooth nature, plenty of punch and linear power delivery. Hooked up with Mazda’s short-throw six-speed manual gearbox, it’s a satisfying choice.

The SkyActiv-D 184 offers more performance and pulling power, even if it’s a bit peakier, with the 445Nm of torque plateauing at 2,000rpm. This car is noticeably faster, though, sprinting from 0-62mph in 8.5 seconds in the manual model and hitting a top speed of 141mph. The extra power is satisfying and it’s no less refined than the low-power unit. Both diesel engines can be combined with Mazda’s six-speed automatic gearbox option. Performance does suffer a little, though.

In contrast to the diesel, the 2.0-litre SkyActiv-G petrol engine has an unusually high compression ratio, again for efficiency and power. Both versions produce their maximum power at a heady 6,000rpm, and don’t deliver their identical peak torque of 213Nm until 4,000rpm. Good job the gearbox is as snappy as it is in the diesel; you need to work it.

The two petrol cars serve up similar performance; it’s only if you frequently use high revs that you’ll feel the benefit of the extra power. Most drivers won’t, because while the 162bhp version is a smooth and effervescent engine, it’s rather vocal and prominent when revved hard. This is the sort of noise you wouldn’t mind in an MX-5, but isn’t really what you expect from this class of car. The low-power petrol engine is offered with the six-speed automatic option as well.