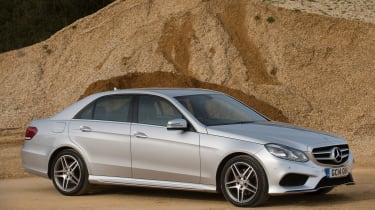 Exec cars are costly to buy new and tend to be dear to run, so often depreciate at a greater rate than smaller alternatives. The E-Class is no exception, which is why it’s so easy to recommend second-hand: it can represent tremendous value and it’s one of the most desirable family cars available at any price. Yet electronics problems can crop up and can be tricky to fix, so before buying make sure everything works correctly. Also pin down exactly what options are fitted, because some cars are much more highly specified than others, with items such as upgraded multimedia, posher trim and a panoramic roof all adding to the Mercedes’ desirability. Be careful when buying, because abused cars aren’t uncommon. Prices also vary, but if you can travel for the right model, you might bag a bargain.

Ever since Mercedes started making cars, it has been a pioneer. With a focus on build quality, luxury and performance, the brand’s values are typified by the E-Class executive saloon and estate, first seen in 1985 when the now-classic W124 was launched.

Since then the bar has been raised ever further, with more technology, safety and comfort features crammed into each successive generation.

The fourth take on the E-Class came in 2009 and it was more accomplished than ever, with a great range of petrol and diesel engines. Later there was the E300 Bluetec diesel-electric hybrid, too. 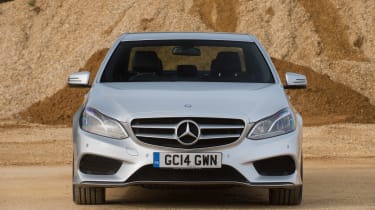 The E300 Bluetec hybrid was unveiled in November 2012, four months ahead of a facelifted E-Class with significantly revised exterior styling, extra equipment – including lots of new driver assistance tech and a DAB radio – cleaner engines and SE or AMG Sport trims in place of the previous SE, Avantgarde and Sport.

An all-new, fifth-generation E-Class range was introduced in 2016.

If you buy a rare manual E-Class, you’ll struggle to sell it on. It’s the same with petrol cars, apart from AMG V8s, but as buyers desert diesel, this might change. 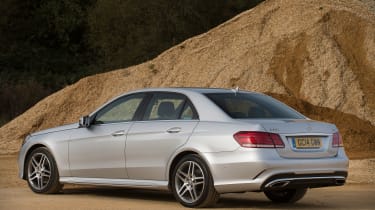 Each trim level has a different chassis set-up. The SE majors on comfort, the Sport is stiffer, but the best balance is offered by the high-spec Avantgarde.

Alternatives to the Mercedes E-Class Mk4

If you’re buying an estate, the Volvo V70 offers lots of space for relatively little cash, combined with decent build quality and excellent safety. However, running costs tend to be high. 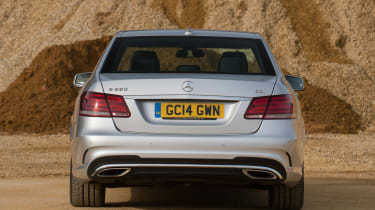 The Jaguar XF secured an impressive third-place finish in our Driver Power 2017 used car satisfaction survey, and comes in saloon or estate forms, so it’s a fine all-rounder.

Yet it’s the BMW 5 Series and Audi A6 that are the Mercedes’ closest rivals, offering a wide range of engines and trims, superb build quality, strong image and relatively high purchase prices.

Some diesels can suffer from faulty injectors. Feel for misfiring and look for black smoke from the exhaust.

Folding rear seats are optional in the saloon, so look out for these. They significantly boost the car’s usability. 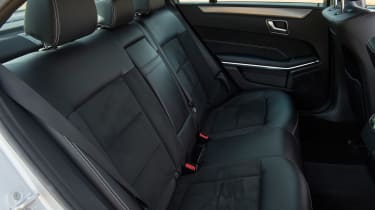 Diamond-cut alloys can suffer corrosion under the lacquer; expect to pay £100 per wheel getting them refurbished.

Four-cylinder engines are quick enough, but can be a bit harsh; the six-cylinder units are much smoother.

There isn’t much flair in the dash design, but it’s logically laid out and the quality is superb, plus the seats are comfy and supportive. Cabin space is generous for five, and the estate has a seven-seat option. Boot capacity is great at 540 litres for the saloon and a class-leading 1,950 litres for the estate. The dash may look button-heavy, but some people will find that easier to use. 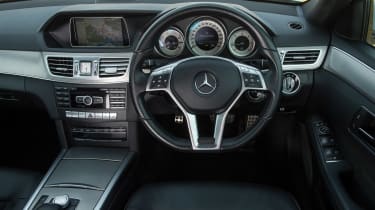 All E-Classes need attention every 15,500 miles or 12 months. Services alternate between minor and major, priced at £260 and £350 regardless of engine, except the AMG V8 models, which cost more.

Auto gearboxes need fresh fluid (£284) every four years or 31,000 miles. Chain-driven engines mean there are no cambelts to replace, but air-con needs to be checked every service; regassing costs £149.

Brake fluid should be replaced every two years (£90) and the coolant every 15 years or 150,000 miles (£390). Mercedes offers maintenance payment plans starting at £35 a month to help with budgeting.

Sixteen recalls so far is hardly cause for celebration. The first came in October 2010 for possible leaks from the power-steering system. The most recent was in March 2017 due to potential electrical short circuits.

In between were campaigns for airbag and power-steering failures, the engine stalling or failing, fuel and oil leaks, the front seats working free and the self-levelling rear suspension not working properly.

Fifth place overall in our Driver Power 2017 used car satisfaction survey shows how talented the E-Class is, and first for safety is no surprise. It achieved top 10 rankings virtually all the way across the poll, scoring impressively in every area aside from a surprisingly low 11th for practicality, plus 45th for running costs.