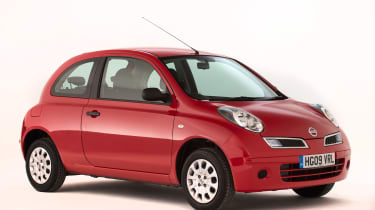 Nowadays, some city cars and superminis feature equipment that a decade ago was available only on more costly models. With the newest Micra Mk3s now seven years old, this little Nissan is showing its age. But don’t let that put you off; for less than £2,000, you can buy a car that’s as good as new and should give years of reliable service. It needn’t be basic, either; posher editions came with climate control and parking sensors. Refined and versatile, with plenty of low-mileage cherished examples available, the Micra is worth a closer look.

An all-new Mk5 Nissan Micra is due in dealers in February, promising a great mix of style, tech and driver appeal. The model it replaces was never really a contender. But if you can’t stretch to the newcomer, and are after your first car – or just cheap, reliable transport – the old Mk3 Micra could be ideal.

When it arrived in 2003, the car was really well received. Auto Express reported that it was “good to drive, great to look at and featured a bigger personality than some far more illustrious rivals”. We added: “This is by far the finest Micra to date.” 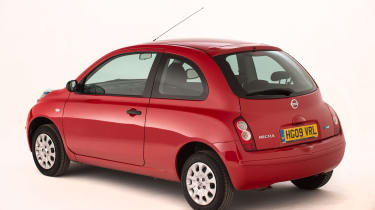 Known as the K12, it’s seen as a better buy than its successor, the K13. So if you’re in the market for a cheap, capable supermini, the Micra Mk3 might be just the ticket.

The Nissan Micra first arrived back in 1982 and was an immediate success. An all-new fifth-generation model is due in 2017, but we’re focusing on the popular Mk3, which was on sale between 2003 and 2010, in this review. 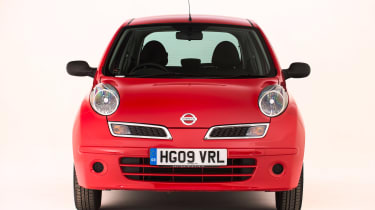 The third-generation Micra hatchback reached UK showrooms in January 2003. Buyers could choose between three and five-door models, with 1.0, 1.2 or 1.4-litre petrol engines, then three months later, a 1.5 dCi turbodiesel arrived. When the warm 160SR appeared in May 2005, it brought a 108bhp 1.6-litre engine; a year later, this model was renamed the Sport SR.

The Micra got its first facelift in July 2006 with a revised nose and tail, overhauled interior and extra standard equipment. The quirky Micra C+C (coupe-cabriolet) arrived in September 2005, with a 1.6-litre petrol engine only; the 1.4-litre option came a year later. Another facelift in September 2007 brought further interior and exterior changes, plus more kit and revised trim levels.

With Mk3 Micras now getting quite old, you should focus on condition rather than specification; a mint 1.2-litre Micra will be a better bet than a ropey 1.4; the 1.0-litre was dropped within two years as it sold poorly. 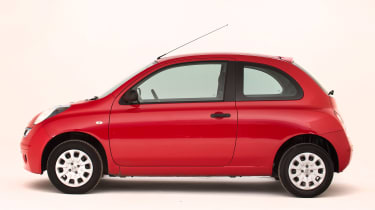 While the bigger engines are better suited to motorway use, the 1.2 is a sweet, free-revving unit that’s great fun. The 160SR is an underrated junior hot hatch that’s genuinely fun to drive. If economy is more important, seek out an unusual LPG edition, or a diesel, as the Renault-sourced dCi engine is great, especially in 81bhp form.

Trims and equipment levels changed over the years, but all models came with electric front windows, remote central locking and twin airbags as standard.

Alternatives to the Nissan Micra

The obvious alternative is the Ford Fiesta, which is available in huge numbers. With a wide model range, low prices, plus decent levels of reliability and practicality, the Fiesta provides very stiff competition for the Micra. 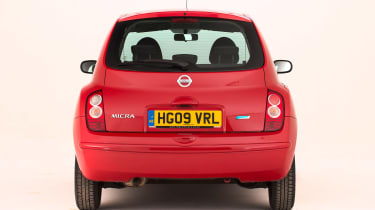 The Vauxhall Corsa is another perennial supermini favourite thanks to its ubiquity and low prices. It’s also quite spacious and running costs are low, but as with the Fiesta, watch out for cars that have been caned by new drivers. Worth considering, too, are the Skoda Fabia, Suzuki Swift and Toyota Yaris; all tend to be dependable, come with strong engines and are good value for money.

Don’t overlook the SEAT Ibiza, either, with its keen prices and willing engines.

Early cars have an unsupported plastic dipstick tube; later ones are reinforced. These early models can suffer from the tubes breaking, leading to oil leaks. 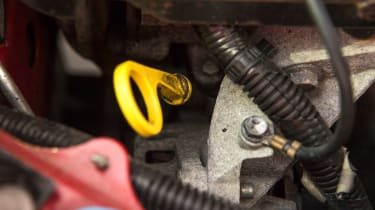 Some Micras are prone to clonks from the front suspension because of the system being misaligned when the car was built. Dealers should be able to fix it, though.

The tailgate lock can fill with water, leading to the mechanism failing. Check that the boot latches properly, as effective repairs can be a bit tricky.

The electrics aren’t always reliable, with various common problems. Batteries can go flat for no apparent reason, but a software update should cure this.

Inside, the Micra is clearly laid out, plus it’s spacious and has lots of cubbyholes. But the seats are flat and unsupportive, while the back seat doesn’t fold flat, which hampers practicality. Still, the rear bench does slide back and forth to maximise boot capacity, which ranges from 237 to 371 litres. 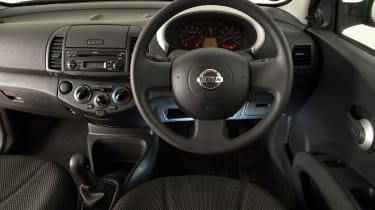 Buy a petrol-engined Micra and you’ll need to have it serviced every 12 months or 12,500 miles; the diesel-engined cars stretch this to 12 months or 18,000 miles.

However, service costs are higher for the dCi editions; they’re priced at £179 and £269 respectively for minor and major checks. The equivalent prices for petrol Micras are £159 and £249. Also, while the petrol engines are chain-driven, so there are no timing belts to replace, the diesel engine does have a belt that has to be renewed every five years or 72,000 miles – and you can expect to pay around £350 for the work to be done. Fresh brake fluid is required every two years, costing £30.

The Micra Mk3 has been recalled six times. Faulty door locks affected the earliest cars (built in 2002), while some, produced up to February 2003, had a faulty seat mechanism; the recall was issued in March 2003. 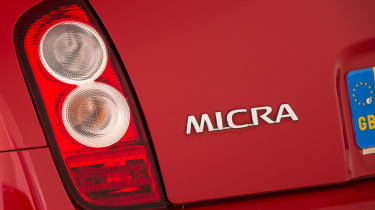 The steering wheel bolt could work loose on Micras built up to March 2003, plus airbag glitches on cars made in late 2008 led to a campaign in April 2009. August 2015 saw the most recent recall; cars produced between June and October 2008 could suffer from steering failure.

The last time the Micra Mk3 appeared in our Driver Power satisfaction survey was in 2012, when it came a disappointing 92nd. Most of its category scores were in the eighties and nineties, although it ranked a strong 28th for running costs. The Micra Mk4 went straight in at number 24 the following year.