Petrol options start with the 1.2-litre 130 PureTech, a three-cylinder unit which returns up to 47.2mpg on average and emits 113 to 125g/km of CO2 with a manual gearbox; opting for the eight-speed auto brings emissions down a little and improves economy slightly.

If you make sure you regularly charge the batteries, then Peugeot claims it is possible to see over 200mpg on the combined cycle. CO2 figures are also very competItive, however. The lower-powered, two-wheel drive Hybrid 225 e-EAT8 emits 41g/km, while the Hybrid 300 puts out a maximum 39g/km, despite its greater performance.

Insuring the Peugeot 3008 will cost about the same as the rival Nissan Qashqai, with the cheapest model being the PureTech 130 in entry-level Active trim, which is in group 11. That changes depending on the trim you go for, but in general the 1.2 will be the cheapest to insure. 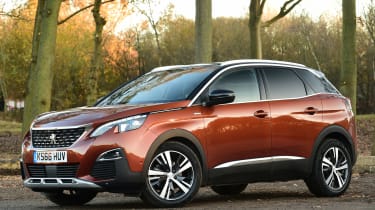 Expert data suggests that the Peugeot 3008 will retain around 43% of its value over 3 years and 36,000 miles, which isn't as solid as rivals such as the Skoda Karoq and SEAT Ateca.