The SEAT Ateca is not only a great 4x4, it’s also a practical family car 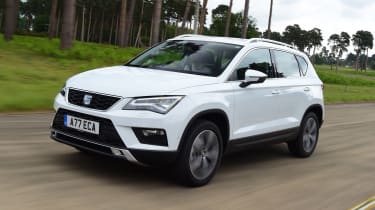 The Ateca was SEAT’s first SUV and proved to be a smash hit, winning our Crossover of the Year title in 2016. Following the Ateca’s success, SEAT now has two other SUVs in it’s arsenal - the larger Tarraco and smaller Arona.

A clean, minimalist interior might seem a bit drab but it’s all ergonomically laid out with typically decent VW Group build quality. The Ateca’s 8.0-inch Full Link infotainment system gets Apple CarPlay and Android Auto as standard and it’s simple enough to use, although the graphics aren’t as sharp as a Peugeot 3008’s and there’s no option for a digital dash - even on top-spec Xcellence models.

SEAT has worked wonders with the chassis however, giving the Ateca hatchback-levels of poise and handling. There’s a strong range of engines from the punchy and refined 1.0 TSI all the way up to the 296bhp turbocharged 2.0-litre petrol nicked from the Volkswagen Golf R.

If you regularly travel off-road, the Ateca can be had (depending on powertrain) with SEAT’s four-wheel drive ‘4Drive’ system from the base-spec ‘SE’ to the range-topping ‘Xcellence Lux’.