Final report: Fond farewell to the Skoda Superb Estate that’s excited us with its practicality 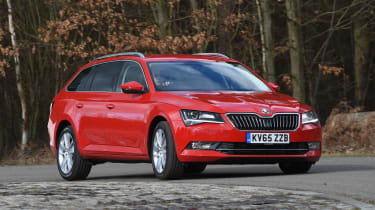 A family holiday is one of the biggest tests of any car, but the Superb excelled. Roomy, refined and remarkably economical, the Skoda barely broke a sweat, while its high-tech features meant I stayed calm and collected too. Well, apart from the endless cycle of AC/DC. 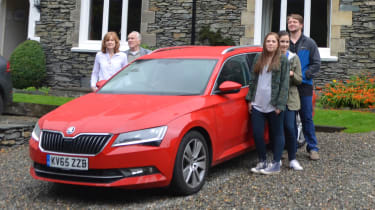 Our Skoda Superb Estate has just passed its toughest test yet: the family holiday. And frankly, it managed it with flying colours. Our choice of early summer break was a run to Center Parcs in Belgium – so while the big red wagon would be parked up for a week once we got there, it had to cope wth a toddler’s worth of clutter for the journey to Lommel and back.

To give you a rough idea, this included a large suitcase extended to its maximum capacity, a couple of big nappy boxes repurposed to hold food essentials for junior and coffee essentials for his parents, a balance bike, a scooter, three cycle helmets, a bed guard, a couple of large rucksacks, a laptop case and a big bag full of books. 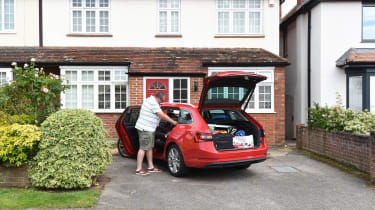 It was, in other words, a load and a half – the sort that would be a challenge for most family cars. But the Superb? It laughed at it. Granted, I threw one bag on the rear floor because it contained documentation for our ferry crossing, but the rest of the load slotted nearly under the tonneau cover, keeping the majority of our luggage hidden. And a slightly more effective packing technique for the return leg allowed me to slot in a few Belgian beers to see me through the summer.

• How to prepare for a summer road trip

Fuel economy was decent, too. Even with a reasonably full boot, the Superb returned over 55mph on the motorway – enough to complete the 270-odd miles from Berkshire to eastern Belgium on little more than a third of a tank. We elected to fit our larger rear-facing child seat (marginally safer, if the stats are to be believed), but it still had plenty of room to breathe in the back.

Unfortunately, my son has worked out that my new-found mastery of Android Auto allows music to be played via Spotify and voice commands, so he spent seemingly endless time requesting tracks from his favourite movies. Being able to tap the screen and say ‘play AC/DC, Thunderstruck’ isn’t quite so appealing when you’re doing it for the 12th time in a row. 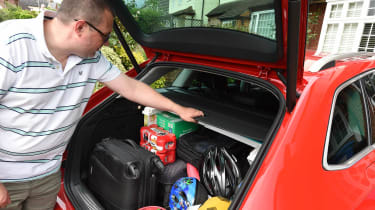 The past few weeks have allowed me to get properly accustomed to the Superb’s automatic cruise control. I’ve played with systems like these before, but the technology has really moved on – to the point where I now feel I can trust the Skoda to look after braking and acceleration in a wide variety of situations.

On the run to Belgium, for example, I was able to set the cruise leaving Calais and barely touch a pedal before I reached Antwerp well over an hour later; if traffic did pull out in front of me, the Skoda backed until the way ahead was clear. And it did this in a really smooth fashion – again, a major improvement on how earlier radar-controlled cruise systems operated.

It’s a real boon now that I’m back in the UK and commuting to London every day, though. I can leave the Superb to deal with the stop-start traffic on the M3 and A40, reducing the stress of my daily journeys into the office. I can see now why the next phase of autonomous driving – where the car keeps itself in the lane – is already a popular choice on cars like the Volvo XC90. 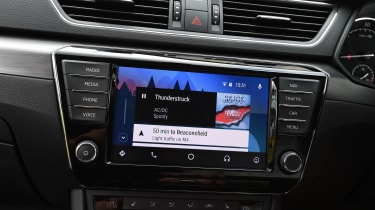 However, there is a small blot in the Skoda’s copybook: a buzzing rattle has developed in the depths of the dashboard, somewhere just ahead of the high-mounted central air vents. The part in question appears to resonate with the Skoda’s engine at roughly the same revs required for motorway speeds in top gear.

Occasional sharp thumps on the top of the dash (I know; how scientific of me) have not achieved anything. I’m going to give it another few weeks to shake itself out before I get the dealer involved. Still, this doesn’t detract from an otherwise impeccable estate. 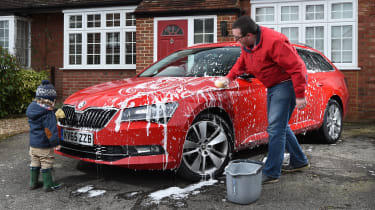 We’ve passed the 2,500-mile mark in our Skoda Superb Estate and already have a solid list of the car’s strong points. It’s massive, of course; we’ve not even scratched the surface of its load capacity. It’s comfortable and refined, with very little wind or engine noise at a fast motorway cruise.

Indeed, these have not been easy months for the VW Group’s diesel engine department, but I’m going to risk a grilling here and say that the Superb’s motor is a star. Our car has the 2.0-litre TDI 150PS (148bhp), paired with a six-speed DSG dual-clutch transmission, and the trip computer tells me I’m achieving almost 49mpg overall. 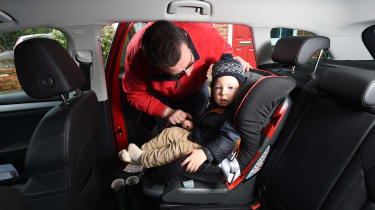 That may not sound like a completely stellar figure – and it’s never particularly wise to trust a trip computer, either – but when you do the maths on our fuel fills, it does add up. And with the Superb’s reasonably hefty 66-litre tank, I’ve been seeing a predicted range of around 700 miles after a brimmed fill-up.

I’d expected to be stopping for fuel around once a week, but it’s much closer to once per fortnight – and I reckon I could reduce that frequency further if I undertook a few long motorway runs instead of stop-start commutes into our offices in London.

There haven’t been any real niggles on the car’s part, although I’ve been trying to get my Android phone to hook up to the Superb’s infotainment system, and failing.

I’ve installed the Android Auto app on my smartphone, but when I do as I’m told – plug it in via USB, then hit the Android Auto button on the Skoda’s central display – I get a mixed bag of results. The phone itself changes its screen as if everything’s fine, but the car’s display just blacks out. 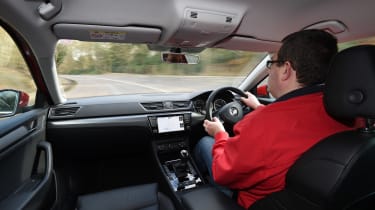 I’m going to hold shy from criticising the car, for now at least. My phone is a cheap Chinese offering that I bought online about a year ago and while it has been great value for money, I’m not entirely convinced that it’s running a pure enough version of Android for the Skoda to approve the connection.

Still, I’ve just bitten the bullet and ordered a Motorola that runs a near-vanilla version of Google’s operating system, so I’ll report back soon on whether that has made the difference. In the meantime,I’ve just booked a family holiday for late spring and the choice of venue was influenced by the big Skoda’s abilities.

After all, when you’ve got this much space and this much fuel range, a weekend on the south coast would be a bit of a waste, wouldn’t it? So I’ve gone for a ferry crossing and a jaunt across Europe instead; I’m enjoying looking forward to the break, and not dreading the drive. 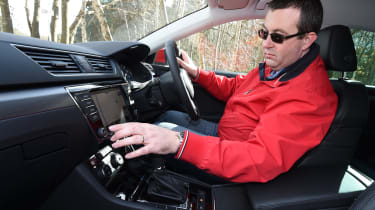 You know a car stands a good chance of worming its way into family life when your toddler’s limited vocabulary includes the words ‘big’, ‘red’ and ‘Skoda’.

That’s precisely what has happened in the first couple of weeks of living with our latest arrival, a Skoda Superb Estate.

It’s one of Auto Express’ favourite big wagons, and is the type of vehicle that promises to be all the car any family could ever need. It has one of the most spacious cabins available from any manufacturer, with particularly impressive rear legroom, and the kind of boot space that used to sell Volvo 760s back in the day. 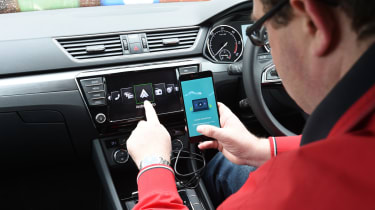 Choosing the mechanical make-up of a Superb Estate isn’t quite as easy as you might expect it to be – our car is a 2.0-litre diesel, with 148bhp and a dual-clutch automatic transmission. But with fuel prices being what they are, we did consider the excellent 1.4-litre petrol, the frankly ludicrous 276bhp 2.0-litre petrol and the 187bhp diesel, in four-wheel-drive automatic spec. They all bring appeal in different areas; we just judged the 148bhp diesel as the best bet for everyday usability, running costs and price.

Skoda doesn’t muck around with specs on its range-topper, either – the entry-level edition has air-con, but move up one rung to SE, and dual-zone climate control and adaptive cruise are added to the mix.

Our example is an SE L Executive, though, which throws in Skoda’s top-spec Columbus navigation and infotainment system, an electrically operated boot, heated and folding door mirrors, and bi-xenon headlights. Added Skoda details include an ice scraper tucked away in the fuel filler flap, a removable LED torch in the boot and a pair of umbrellas hidden in the front doors. 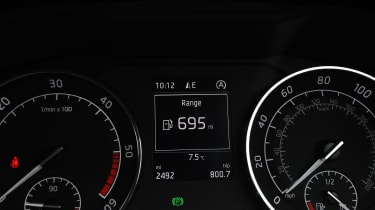 There wasn’t a great deal of choice on the options list, so we kept things pretty simple, with just a couple of real-world add-ons: a fold-flat front passenger seat, capable of swallowing Ikea’s largest wardrobe box, and a rear-view parking camera, so we can keep tabs on what’s happening when the rear bumper stretches into another county.

The other options – interior mats and a space saver wheel – are added for peace of mind. The end result is a great load-lugger that weighs in at £28,300 with options, which is surprisingly affordable on a monthly PCP plan if you’ve got a half-decent motor to use as deposit. That’s comfortably short of the smaller BMW 5 Series Touring’s price, too.

We didn’t even go for the metallic paint, opting for the Corrida Red coat that’s one of three no-cost ‘flat’ shades. Frankly, it’s a lot of red in one place – but it certainly gets you noticed. It also helped my boy to learn those magic words that meant a ride in the Superb instead of our regular Mazda 3. 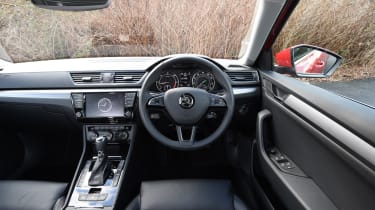 Lucky for Henry, the Skoda has acres of space to accommodate either his rear or front-facing child seats – plus the passenger space means there’s plenty of room to stretch his legs out without the slightest concern of scuffing the front seats (that’s my concern, of course – he wouldn’t care either way).

In spite of plenty of stop-start commutes to the Auto Express office in traffic-clogged central London, the big red Skoda’s trip computer is reading over 50mpg on a good run. It’s returning around 44mpg overall, and with a 66-litre fuel tank, that means more than 700 miles between fills.