Second report: new SsangYong Korando SUV is perfect for our man and his growing family 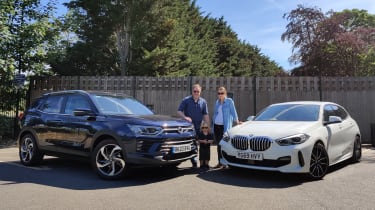 The new SsangYong Korando is a world away from the car it replaced. It’s relatively refined and the quality of the interior is a pleasant surprise, but I just wish it were a bit more enjoyable from behind the wheel.

I’ve finally got the keys to the new SsangYong Korando Ultimate I’m running on the Auto Express fleet. I’ve been waiting for a while, because it spent most of lockdown stuck in a garage after getting a puncture, but it’s finally been released and I can’t wait to spend some time with it.

I’m mainly looking forward to this for one reason: space. I’ve been running a BMW 1 Series for the past six months and it’s been great fun to drive, but there’s recently been a new addition to my family (since the above picture was taken), and I definitely need the extra space and practicality of a compact SUV.

The 1 Series did surprise me with how much room it had, but it simply can’t match the Korando when it comes to boot space and legroom. It was so much easier for my heavily pregnant wife to get in and out of the SsangYong, and after our second child arrived, with two car seats to account for, the roomy interior really helped.

The first time my wife got in the Korando and sat down on the comfy seats there was a huge smile on her face. The extra space meant she could also recline the seat and get as comfortable as possible. That’s something she was only able to do in the 1 Series by eating into the rear passenger legroom. 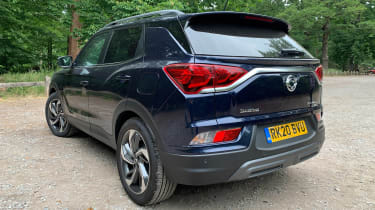 The boot also offers an impressive 551 litres of space (1,248 litres with the rear seats folded down), easily trumping rivals such as the Nissan Qashqai (430 litres), Renault Kadjar (472 litres) and SEAT Ateca (510 litres). As you would expect, it’s also significantly more than the 380 litres on offer in the 1 Series, meaning I can squeeze in all the extra stuff needed for a new baby.

The Korando range starts at less than £20,000, but our top-spec Ultimate model costs more than £28,000. And although that might seem expensive, the car does come with plenty of kit; in fact, it’s a bit of a struggle to find anything that’s missing. Luxuries such as heated and cooled electric leather seats, a heated steering wheel, a rear-view camera, keyless operation, Apple CarPlay and Android Auto connectivity, LED headlights, 19-inch alloy wheels and much, much more are all included.

Arguably, the best feature of all is the impressive Blaze Cockpit. Standard on Ultimate models, it combines a 10.25-inch digital instrument cluster and a nine-inch HD central infotainment screen. It looks as good as almost any system on the market in this segment and it’s really easy to flick through the different menus and views using the controls on the steering wheel. The system also allows you to change the LED interior lighting across the fascia and front doors, with a choice of 34 colours.

True, there are a few cheap-looking materials throughout the cabin, but overall it’s a thoroughly pleasant place to be.

I’ve sent a few pictures to my friends and family, and they have been very surprised at just how luxurious it looks. I guess that’s why the company’s marketing slogan is ‘Surprisingly SsangYong’. 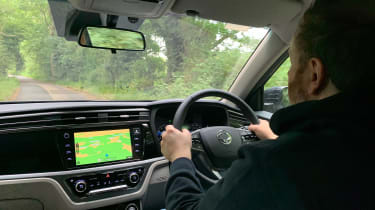 One area where the Korando isn’t quite as good is in the way it drives. Although I haven’t been able to give it a thorough test yet (more on why soon), it’s become immediately apparent that it’s not as competent as some sharper SUV rivals.

There’s plenty of body roll, meaning the car doesn’t feel as planted as I’d like. Sure, you’re not exactly going to expect hot hatch thrills in a compact SUV, but many of this car’s rivals simply do a better job.

The 1.5 GDI-Turbo petrol engine (there’s also a 1.6 diesel engine available) boasts a decent 161bhp, but it’s short of torque, at just 280Nm. It’s not fast, either, taking 12 seconds to ‘sprint’ from 0-62mph. The lack of power isn’t really that noticeable around town, but come to a motorway slip road and you do wish there were a bit more.

While the Korando does disappoint when it comes to power and dynamics, it means the overall driving experience is relaxed. I’ve found myself taking my time and not rushing to get to places.

At least the engine is relatively refined, with the smooth six-speed automatic ’box adding to the car’s calm nature. Let’s not forget the fantastic seven-year/150,000-mile warranty that SsangYong throws in as standard, either. If anything were to go wrong, it’s good to have that peace of mind. 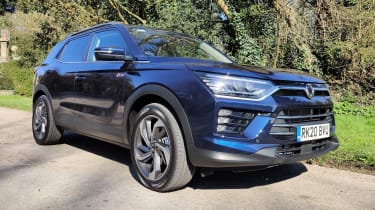 Puncture aside, the SsangYong Korando SUV has made a solid start on our fleet (by Ben Hodges)

This is the newest member of the Auto Express test fleet: a SsangYong Korando. We took delivery of the car just before the country went into lockdown – and my time in it has gone from what was supposed to be a couple of days into months.

With a range starting from a shade under £20,000, it initially seems to be a reasonably priced SUV that undercuts rivals like the Peugeot 3008 and Ford Kuga. However, step up through the trim levels to the flagship Ultimate model – as we have here – and the starting price of £28,345 puts the Korando much closer to its rivals – so it’ll have to beat them on their own terms.

The car we’ve added to our test fleet is a 1.5-litre petrol model, with an automatic gearbox and front-wheel drive only.

While the exterior design of the Korando is likely to split opinion, and I’ll admit to not being entirely sold on the looks just yet, its optional ‘Dandy Blue’ metallic paint finish (£550) and the standard-fit 19-inch alloy wheels are smart enough. The angular design is something you don’t see on every family SUV, so it’s distinctive.

The Korando Ultimate gets plenty of other standard equipment, too, including LED daytime running lights, foglamps and tail-lights. Inside, leather seats that can be heated and cooled are a welcome upgrade, along with climate control and auto wipers. 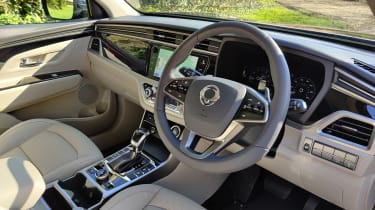 The fully digital instrument cluster is another impressive feature, with a 10.25-inch panel that joins the nine-inch touchscreen infotainment system.

My first impressions of the onboard tech are that it’s good, because the digital dials are easy to read and operate, and connecting my phone to Android Auto was a simple task – aside from having to tap the on-screen ‘consent’ button every time I start the car.

Despite the Korando Ultimate getting pretty much every conceivable item I could ever want, the quality is slightly let down in places; there are cheap, flimsy-looking plastics which stand out from the higher- quality materials in certain places in the cabin. Also, with a light colour scheme, keeping the interior clean might be a tough task in the coming months, so I will be interested to see how it holds up.

The 1.5-litre turbocharged petrol engine produces 161bhp and 280Nm of torque. While those are not powerhouse numbers, on my few motorway trips before lockdown, the engine delivered relaxed progress, with the six-speed automatic gearbox being smooth enough, if a little slow to react if I want it to select a lower gear when pressing the throttle. At faster speeds and while accelerating hard, the engine is a bit coarse, so it’s best to keep things relaxed.

This calm nature continues with the handling, which is typical of a car of this type. There’s a decent amount of grip, but lifeless steering and a small amount of body roll mean it’s not much fun to drive. 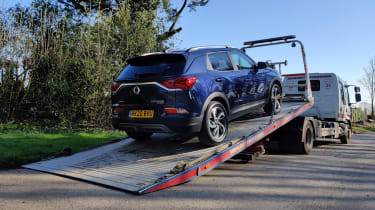 Having only spent a couple of weeks with the Korando before the UK went into lockdown, it has met every challenge I’ve asked of it so far. Being an owner of two older cars that always need replacement parts, the Korando’s sizable 551-litre boot has proven useful, with space for a full set of replacement wheels for my BMW 5 Series.

Our short time with the SsangYong hasn’t been entirely uneventful: we picked up a puncture while on a local trip.

This raises my only gripe with the Korando:  the lack of a spare wheel, which is not an available option on this Ultimate- specification car.

This meant the split tyre led to a trip on a tow truck, thanks to SsangYong’s excellent roadside assistance package – the truck quickly swung into action to recover the car.

The Korando’s rubber was replaced straight away by my local dealership, but that was just before the UK shut down. This means the car is still in their car park and we’ve not driven it since. We can’t wait to go and pick it up once this is all over.