VW aims to combine performance, low running costs and practicality with the new Golf GTD Estate. Is it a success? 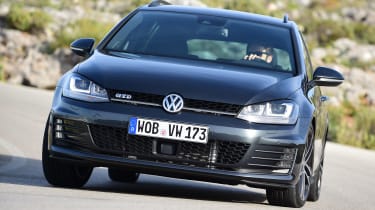 As an estate the GTD’s fitness for purpose extends beyond that of the hatchback – an achievement on its own. It packages together practicality, performance and economy effortlessly and is executed precisely enough so it’s no less enjoyable to drive than the hatchback. If you favour outright performance the R Estate is the one to pick, but if high mileage capability and low running costs are key, the GTD Estate makes compelling case.

If the Golf R Estate is a little too hot and the new Golf Alltrack a little too cold, fear not, as VW’s third installment of its estate offensive could have all the makings of a winner.

Like the R, the more frugal GTD Estate has undergone similar surgery, retaining all of its internals over the hatchback with VW turning its attention only to the rear end. The result is an extra 307mm of bodywork hanging over the rear axle, which brings with it just a 100kg weight gain. Like the Golf R Estate, the GTD Estate costs an identical £695 more than the hatch spec for spec, too. 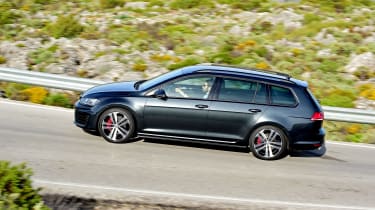 But more importantly, the addition also means a significant boost to practicality and for a car in which versatility is priority, that’s key. The 380 litres offered by the hatch swells to 605 litres in the estate, and folding the rear seats flat adds a further 350 litres of space taking total capacity up to 1,620 litres – more on both fronts than the Focus ST diesel Estate.

It’s the first time VW has applied the GTD treatment to the Golf Estate and with GTD hatch sales outstripping the more powerful GTI by almost three-to-one, it seems an easy avenue to take to boost sales figures. 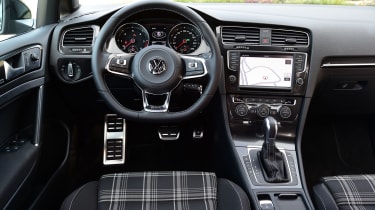 The added bulk does mean a small sacrifice in performance, but 181bhp and 380Nm of torque served up by the 2.0-litre turbodiesel means there is very little telling on the road. Like in the hatch, there’s a slight diesel grumble lower down in the rev range and ever-accessible slug of torque allows you to pick up pace in the GTD a lot quicker than the 7.9 second 0-62mph sprint suggests –on paper, you lose 0.4 seconds over the hatchback.

As expected, the narrow power band means the engine becomes a little breathless beyond 4,000rpm but the six-speed DSG feel a lot more obedient and in sync with the torquey diesel engine compared to the petrol-powered R Estate. A slick six-speed manual can be had with a £1,415 discount on the list price however, which also drops a tax band due CO2 emissions of only 115g/km compared with the auto’s 125g/km. 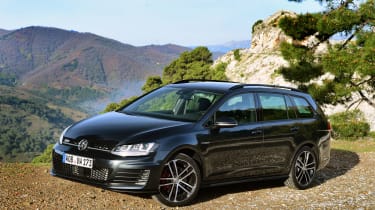 But the GTD has more up its sleeve than just in-gear grunt. The familiar MQB chassis retains its neutrality and composure from the hatch, so despite the added 100kg it’s still as forgiving on the move and eager to dart around faster corners.

The estate also carries over the trick XDS+ system which does an impressive job of mimicking a limited-slip differential, by pinching the inside front and rear wheels on turn-in giving a far greater sense of agility than a diesel estate really ought to have. 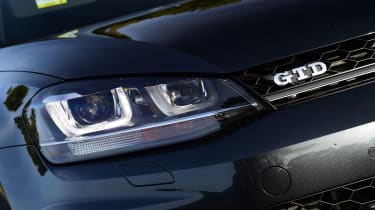 It also gets progressive steering which weights up nicely the more lock you apply. It could do with an extra layer of feedback but glancing between dials to see you can eke out 50mpg in the real world makes the GTD estate difficult to criticise.

And because its forte is practicality, don’t think the estate is lacking in the style stakes. It sits 15mm lower to the ground than any other Golf estate, with GTD specific bumpers, tartan trimmed sports seats and 17-inch alloys giving a brawny but understated look.