Engines and chassis are still new, but Volvo's new tech and four-cylinder engines are proving reliable

Volvo’s reputation for safety is pretty much the best in the entire car industry, and the sister car to the S90, the XC90 SUV, racked up a record score when it was crash-tested by legislative body Euro NCAP. The S90 earned a five-star Euro NCAP score in 2017, and although its percentage score was lower than the XC90's, at 95 per cent you'd hardly call it poor.

The S90 has a number of features which try to prevent a crash from happening in the first place. The extensive list of standard safety kit includes Pilot Assist, which can keep the car in its lane and at a safe distance from the car in front at speeds of up to 80mph, and large animal detection, which was originally designed for elk and moose, but is also said to be effective at spotting deer emerging from the side of a dark road. 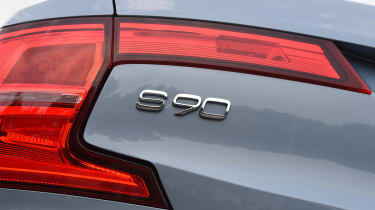 The S90 has yet to appear in the Driver Power survey - and isn't likely to thanks to its low sales numbers - but the Volvo XC60, which shares electrionics and engines with the saloon, came a respectable 16th in the 2019 survey. Owners praised its safety kit, comfort and reliability, which are all traits that the S90 should carry over.

Volvo's warranty cover lasts three years or 60,000 miles, whichever comes soonest. That's not quite a match for BMW's offering, though, which lasts for three years too but drops the mileage limit. At least Volvo offers extensions to its warranty; you can add a year and a further 20,000 miles.

The S90’s servicing intervals are 12 months; the work required alternates between interim and major services. Volvo offers a monthly scheme that allows you to spread the bill on an interest-free basis.