The Audi Q4 e-tron concept is the first car from the company on the MEB platform, and it has a 280-mile range

Audi has revealed what will become its fifth electric vehicle in a 12-strong EV line-up by 2025: the Q4 e-tron concept. It’s an electric SUV, and by the time the production version of this concept car is for sale at the end of 2020, it will be the fourth electric crossover in Audi’s fold, joining the full size e-tron and e-tron Sportback, and an electric variant of the Q2 compact crossover sold in China only.

Before the Q4 arrives, the covers will also be lifted off Audi’s equivalent of the Porsche Taycan, in the form of the production version of the e-tron GT.

The Q4 e-tron concept is the first Audi to use the VW’s group’s Modularer Elektrobaukasten platform, better known by the acronym MEB. It’s also the first time we’ve seen a premium vehicle underpinned by the mass-market electric architecture, as so far all other MEB concepts have been released under the group’s three volume brands: Volkswagen, SEAT and Skoda.

Under the skin of the Q4 e-tron concept, the MEB platform houses a battery pack 82kWh in size. It sits under the passenger compartment of the vehicle between the axles, and it weighs 510kg. 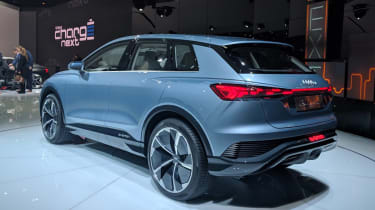 The battery sends charge to a pair of electric motors – one driving the front axle, the other the rear. Total system output is rated at 302bhp, and there's 460Nm torque. Audi claims a 0-62mph time of 6.3 seconds and an electronically limited top speed of 112mph. In normal driving, the Q4 e-tron quattro uses the rear axle only for the purpose of efficiency, with the front axle only brought into play under hard acceleration or low traction. 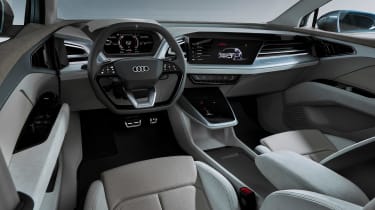 With the 82kWh battery on board – the largest battery compatible with the MEB system at present – Audi claims a maximum range of ‘over’ 280 miles on a single charge, recorded under the new WLTP standard. The battery can be recharged at a rate of 125kW, enabling an 80 per cent top up in half an hour when connected to a charger capable of that output.

The Q4 e-tron concept occupies the same segment as the Q3, but it’s a little bit larger than Audi’s big-selling conventional crossover, measuring 4,590mm long, 1,900mm wide and 1,610mm tall. The Q4's overall shape is fairly conventional, with the rear end of the concept just a little bit more rakish than the current Q3.

Design wise, the concept is a fairly close preview of the final item. It fields distinctive shoulders over the front and rear axles, slim headlights perched high in each corner of the car’s front end and huge 22-inch wheels. Touches from the larger e-tron SUV are found on the Q4 e-tron’s exterior, including the structure of the front grille and the wide, full-width LED taillight reaching across the concept’s tailgate.

Inside, the dashboard layout seems to be inspired by the e-tron GT concept, using a hexagonal steering wheel and a near-identical centre console, with a 12.3-inch touchscreen infotainment system angled slightly towards the driver and a virtual cockpit display behind the steering wheel. The interior is slightly different in fit and size, given the fact that the Q4 e-tron concept uses a different platform to the e-tron GT.

The concept is a four-seater – five seats will appear by the time it goes into production late next year. When it arrives on sale, it’ll be one of several compact premium electric SUVs hitting the market, alongside the upcoming Tesla Model Y and BMW iX3.

What does the new Audi Q4 e-tron have to beat? These are the best electric cars currently on sale...

The fourth-generation Audi A3 is on sale now, in both hatchback and saloon body styles – and a starting price of £23,300
Skip to HeaderSkip to Content