Best new cars coming in 2022 and beyond

The world may be changing all the time but that doesn't stop manufacturers planning ahead. From electric crossovers to hatchbacks, these are the new models set for debut in 2022 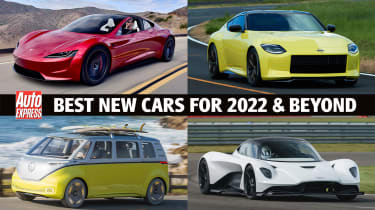 You've already seen our list of the best new cars coming in 2021, but manufacturers work years ahead and we already know a few new cars that are set to arrive in 2022 and beyond.

As battery technology improves, it's no surprise to see more and more electric cars with ever increasing ranges appearing on this list. And it's not just all-new EV models either, with household names such as the Volvo XC90 set to switch to electric power.

Of course, SUVs will still be popular in the future and arguably the most controversial new car of 2022 could be the Ferrari Purosangue SUV.

Scroll down below for our full list of the best new cars coming in 2022 and beyond... 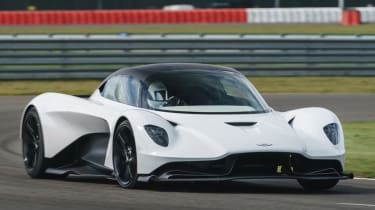 One rung up the ladder from the forthcoming Vanquish is the Valhalla, which will be the second member of Aston’s three-car mid-engined range. It’ll be larger, more powerful and more focused than the Vanquish, but won’t tread on the toes of the lightweight, track-honed, V12-powered Valkyrie.

Designed to compete with the likes of the new Ferrari SF90 Stradale and Lamborghini’s successor to the Aventador, it will also use Aston’s newly developed 3.0-litre V6. However, it will have hybrid assistance, taking the power output close to 1,000bhp. 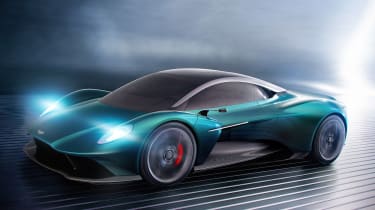 The next Aston Martin Vanquish promises to be a total revolution, transforming from a front-engined GT into a mid-engined supercar. Still at concept stage for now, it has the Ferrari F8 Tributo and McLaren 720S in its sights, and senior sources say the concept is around 85 per cent of what we’ll see on the road in 2022.

The reborn Vanquish will sit on a totally new aluminium-bonded platform, and while the brand has come to rely on Mercedes-sourced 4.0-litre V8 engines in recent times, the new model will get an Aston-developed V6 turbocharged engine, mounted behind the cabin and developing in excess of 700bhp. 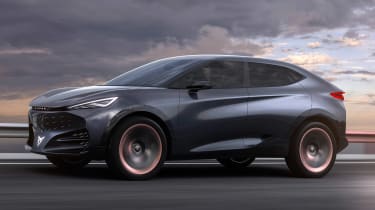 SEAT’s sporty offshoot Cupra looks like it could muscle in on the all-electric SUV market with the rakish Tavascan. It’s officially a concept for now – the Spanish brand is choosing to focus on development of plug-in hybrids such as the Leon and Formentor before confirming production – but all of the basics are ready to go.

The Tavascan uses the most potent layout available within the VW Group’s MEB electric platform: a twin-motor, four-wheel-drive set-up with 302bhp. Visually, it should look near-identical to the concept in production form; only minor details such as the wheels and door mirrors are likely to change. 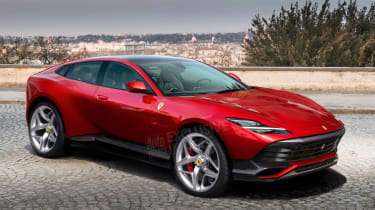 Ferrari’s upcoming SUV, known as Purosangue, will be the most controversial car in the firm’s 91-year history. Our exclusive image gives you an idea of how the finished model could look.  It would use the same platform as the Ferrari Roma, so should have a long bonnet and a cab-rearward design to enable a four-seat layout.

Ferrari is developing a new V6 engine, which could appear in the Purosangue in combination with a plug-in hybrid system. Whichever powertrain the Italian marque decides to fit to its new SUV, one thing is for certain: it needs to be the most convincing SUV to drive. 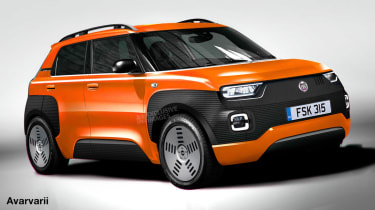 Fiat will jump into the twenties with a small-car revolution. While the all-electric 500 will be aimed at premium rivals, the Panda will offer a more affordable take on the supermini formula.

As our exclusive image previews, it’s set to closely resemble the Centoventi concept, first shown at the 2019 Geneva Motor Show. Expect no-nonsense styling, a boxy body shape, and chunky plastic panels that can be cheaply replaced. FCA’s proposed merger with the PSA Group means that the Panda could share a platform with the Peugeot 208, giving scope for petrol, diesel and electric powertrains. 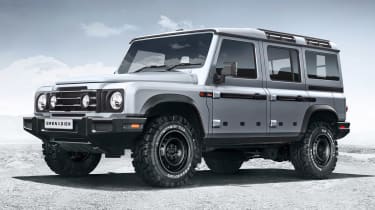 If the new Land Rover Defender has gone a little too posh for you, then the new Ineos Grenadier could be the answer. The company is owned by one of Britain’s richest men, Sir Jim Ratcliffe, and the all-new Grenadier is designed to be no-nonsense, go-anywhere transportation.

It’s based on a ladder-frame chassis, and will feature beam axles, three locking differentials and a low-range transfer case, while power will come from 3.0-litre six-cylinder engines sourced from BMW. Later down the line, Ineos will also develop a double-cab pick-up version of the Grenadier. 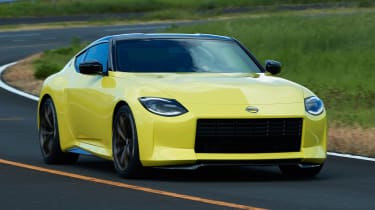 A replacement for the aging Nissan 370Z is on the way, only this time it will be a rival for the likes of the Porsche Cayman and Toyota Supra, rather than the Audi TT. The Nissan 400Z will use similar architecture to the Infiniti Q60, a front-engined coupé that can accept a big six-cylinder engine.

Significantly, the Q60’s V6 engine can develop up to 400bhp, which gives credence to a rumoured 400Z badge for the new Nissan sports car. Our exclusive illustration above shows a sleek coupé with a sharp, 240Z-style nose as well as pronounced haunches, which are a Z-car hallmark. 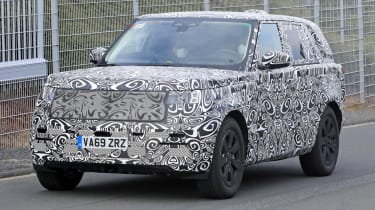 The styling of the Mk5 Range Rover is set to blend the model’s traditionally boxy shape with a Velar-inspired front and rear. It will share JLR’s MLA platform with forthcoming crossover and Sport variants, but while it can support full electrification, an EV is unlikely to be offered at launch, meaning the mainstay of the range will be a 3.0-litre six-cylinder mild-hybrid diesel. Standard and long-wheelbase models will be available, the latter giving the option of two rear ‘executive’ seats.

Land Rover’s new dual-processor infotainment set-up, which supports over-the-air updates, will be fitted, following its debut in the Defender. 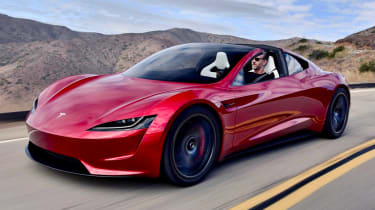 There’s one thing you need to know about the Tesla Roadster; it’ll sprint from 0-60mph in 1.9 seconds. But perhaps even more remarkably, the brand claims a top speed of more than 250mph and a 620-mile range.

It’s all made possible by three motors with a combined output of 10,000Nm, and a 200kWh battery – nearly twice the size of any other EV power pack on the market. Despite the truly remarkable performance, Tesla boss Elon Musk promises a regular 2+2 seating layout along with a removable roof panel. 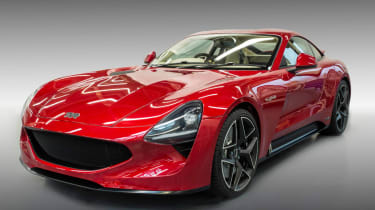 First seen in 2018, the reborn Griffith is going through a difficult birth. The company is currently trying to raise £25million in capital to help get its plans into production.

As such, it’s hard to know when the 500bhp V8 sports car will arrive. But while TVR claims all 500 £90k Launch Editions are sold, some slots have likely been freed up by buyers who were supposed to get their model last year. 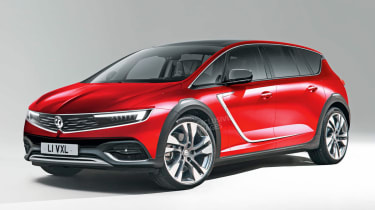 The Insignia is one of Vauxhall’s staples, but the company is lining up a radical overhaul for the next generation. Boss Stephen Norman has described it as “the biggest metamorphosis we’ve seen so far from Vauxhall”.

That’s likely to mean the end for the Insignia’s traditional body shape, allowing it to evolve into something that’s halfway between an SUV and an MPV. It’ll probably remain a five-seater, albeit one with increased space and a higher seating position for occupants. Under it all will be PSA’s EMP2 platform, so expect plug-in electrification to be a key part of the powertrain line-up. 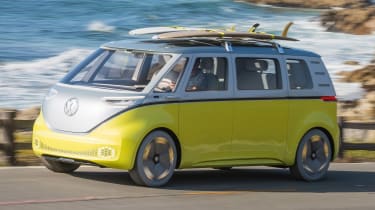 Volkswagen is pushing ahead with its retro-themed ID. model, the ID. Buzz, an indirect successor to the manufacturer’s iconic Type 2 Microbus. The firm believes it can use the concept’s one-box design to produce a car which can trump the practicality of modern MPVs, while delivering a more desirable image than traditional people carriers.

The ID. Buzz will use a stretched version of the ID.3’s MEB platform, allowing a longer wheelbase for greater space and, crucially, a larger battery that can cope with heavier loads and deliver more than 370 miles of range. 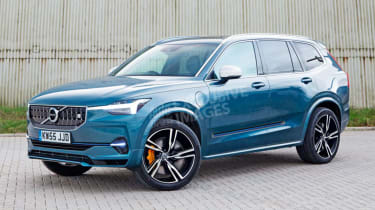 Volvo has hit the headlines with its push towards electrification – and one of the standard bearers for this process will be the next XC90, which is due to be revealed in 2021 ahead of sales starting in 2022.

The flagship SUV will switch to the next generation of Volvo’s larger platform, called SPA2. It’ll ditch the option of diesel power, becoming available as either a plug-in petrol hybrid or a pure-electric vehicle. Other features should include a Google-derived infotainment system with over-the-air updates, and further advancements in self-driving technology.