BMW i8 gets Protonic Frozen Black and Yellow special editions 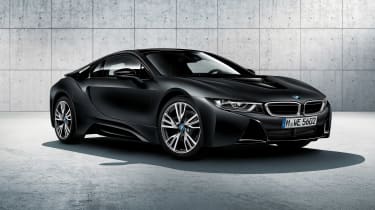 BMW has revealed a new special edition i8, set to go on sale in April after its debut at the upcoming Geneva Motor Show.

It’s another ‘Protonic’ addition to the i8 line-up, known as the i8 Protonic Frozen Black edition and like the i8 Protonic Red revealed around this time last year, it boasts a unique colour scheme plus a handful of individual styling tweaks.

The Frozen Black paint finish is combined with gloss black fascia inserts for a dark look all around. In the cabin, bright yellow contrast stitching is found on the seats and centre console, alongside Protonic Frozen Black lettering on the doorsills.

It’s not the only special edition i8 on the cards in 2017 – BMW has also revealed a Protonic Frozen Yellow edition, adding a splash of colour to the i8's palette with bright yellow paint. 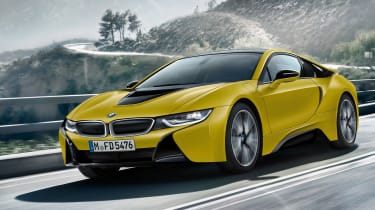 As expected the car is unchanged mechanically, combining a 1.5-litre three-cylinder petrol engine with an electric motor driving the front wheels for a combined 357bhp.The i8 is capable of 0-62mph in 4.4 seconds and a top speed of 155mph, all while posting a claimed 134.5mpg and 49g/km CO2.

Released in 2014, the current generation i8 is still in BMW's product plans and a Roadster version looks likely to appear in 2018.

The Protonic Frozen Black car will appear on the BMW stand at Geneva this March, alongside other new releases such as the facelifted 4 Series and the new 5 Series Touring.

Which one of the new colours do you prefer on the i8? Let us know in the comments.

Welcome to our Geneva Motor Show hub page, scroll down for all our Geneva content...
BMW i8 review