Reliant Robin - the worst cars ever

The butt of countless jokes, the Reliant Robin was missing more than a wheel and will be remember as one of the worst cars ever 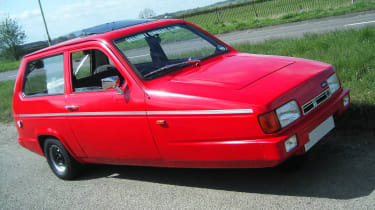 Like the G-Wiz, the Reliant Robin three-wheeler borders on the classification of being a car. It's a myth that it can be driven on a motorcycle licence - the earlier Regal only qualified, but the Robin was too heavy to do the same. The licensing requirements changed in 2001 anyway, so you need a full driving licence to drive a Robin, even though it doesn't have the full complement of wheels.

While the Robin was the car to vote for in our poll, its basic formula was the backbone of Reliant car production since its founding in 1935. Unfortunately Reliant's small fibreglass-bodied three-wheelers have also been the butt of jokes for decades, certainly helped no end by the appearance of Regal vans in Only Fools And Horses and Mr Bean.

In reality, the Robin was an evolution of the Regal. The first model was launched in 1973, featuring a 750cc four-cylinder engine, although this made way for a rip-snorting 850cc motor in 1975. Thanks to the Robin's lightweight fibreglass construction, this meant it could achieve a nosebleed-inducing 85mph and economy of 70mpg. But as the Robin was launched during the Fuel Crisis of the mid-Seventies, its combination of a low list price and running costs had appeal.

Despite what some TV shows would lead you to believe, the Robin wasn't a liability in corners. Of course, with all of the car's weight centred in the middle of the nose, you had to be a bit circumspect with sharp turns, but the Robin wouldn't roll over at the slightest sight of a bend. And besides, it was front-engined and rear-wheel drive - that's like a BMW, right?

The Robin lasted for eight years, before it was replaced by the Rialto, which again stuck to the three-wheel formula. But the Robin didn't die, as it returned in 1989 as a more upmarket model alongside the Rialto. Prices had crept up, and top-spec versions cost up to £9,000, although the new car market had changed considerably since the 1970s, and sales weren't as good as in the past.

A Mk3 Robin arrived in 1999, and it was the first Reliant designed on a computer, although the firm still had to graft Vauxhall Corsa headlights into the design. However, the last car was short-lived, with a final run of 65 models sold in 2000, while the very last Reliant-built Robin was built on Valentine's Day in 2001.