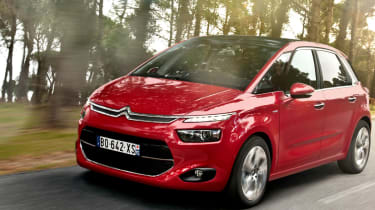 The Citroen C4 Picasso has moved with the times and now gets striking looks to go with its practical interior and value price tag. It’s sharper to drive, better built and packs in better tech, too. We recommend the more powerful diesel version, though, as it offers a better blend of performance and economy, especially when loaded with a family’s gear.

When you look at the all new Citroen C4 Picasso, you can see just how dramatically the motoring world has changed in terms of design, efficiency, technology and packaging since the egg-shaped Xsara Picasso hit the road in 1999.

For a start, the driving experience in the C4 Picasso, tested here with the 91bhp version of Citroen’s 1.6-litre diesel engine, is way ahead of any previous Citroen MPV. Thanks to the new EMP2 platform, the C4 Picasso is 140kg lighter than its predecessor, and now weighs the same as the smaller C3 Picasso.

There’s a new rear suspension design, too, which contributes to the car’s surprisingly agile feel. The damping seems firmer than before, causing the car to fidget a little over imperfections in the road, but it’s still soft enough to float over bumps without upsetting passengers.

There’s not much feel from the light steering, but the newcomer responds quickly and smoothly to direction changes. So much so, in fact, that it shows up the need for a little extra lateral support on the asymmetrically designed front seats. It’s still set up to be comfortable above all else, but the car strikes a good balance between feeling a bit more dynamic and shaking your passengers silly.

Citroen reckons that most buyers will opt for the more powerful 113bhp diesel. And while the 91bhp engine fitted to our car is smooth, and the five-speed gearbox it’s connected to has nicely spaced ratios, it’s a bit short of go. Drop out of the turbo’s boost range, and it requires rather a lot more effort to keep it up to speed than the more powerful engine. An extra £800 for the 113bhp car seems to be a wise investment.

There’s a big step forward in design, too, with a striking nose featuring four lights – headlamps down low, indicators and daytime running lights above – plus tasteful chrome trim. The C4 Picasso is actually 40mm lower and shorter than before, which helps give it a much more dynamic look.

An enormous windscreen, slender, forked A-pillars and a low shoulderline help flood the interior with light. But the C4 remains stuck with the customary people carrier problem of a huge dashboard and rounded nose, so you end up with little idea of where the front of the car is.

There’s loads of storage, including a big storage bin behind the gearlever, plenty of cup-holders and an illuminated centre cubby with a power point, plus connections for auxiliary cables, USB sticks and iPhones.

The dash itself is smart, clear and uncluttered, although the touchscreen takes a little getting used to as, despite looking like a smartphone, it doesn’t respond as quickly. The monochrome upper display is also a bit of a shock at first, but is easy to read once you’re familiar with it.Space in the back is generous, as there’s plenty of head and legroom, while nice touches include the fact that each front seatback has a tray table fitted with a small elastic strap for holding your drink in place.

Each of the three rear seats folds and slides individually, and has Isofix mounts, while the boot has a wide-opening hatch. This opens to reveal a square load space with a low lip – proving the C4 Picasso remains a practical choice, despite its added style.