Turbo petrol engine is punchy and refined, but disappointing ride and refinement and average handling disappoint 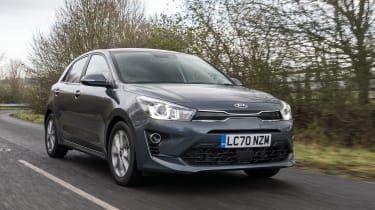 The Kia Rio shares much with the Hyundai i20 under its skin, including major components such as the chassis and some powertrains. Kia claims its car has been tuned differently, however, with focus on improving both comfort and driveability.

Unfortunately, the result is a bit of a mixed bag. On the one hand, the Rio handles tidily enough, with good body control in the bends, accurate (but feel-free) steering and decent agility. It lacks the sense of involvement or fun found in the Ford Fiesta, yet it’s acceptable for the class.

The moderately engaging handling comes at the expense of ride comfort and refinement, though. It’s by no means uncomfortable, but the Rio feels quite firm over all but the smoothest surfaces and can get a bit crashy over big bumps. Refinement isn’t all that impressive either: wind noise is kept at bay, but road noise is noticeable on the UK’s poor surfaces. Both these issues only get worse with the larger wheels of top-spec cars. In this respect, it’s no better than the previous generation Kia Rio.

That’s a shame, because around town the Rio is likeable enough, thanks to good all-round visibility, a slick gearshift and light clutch, plus those smooth and nippy engines. 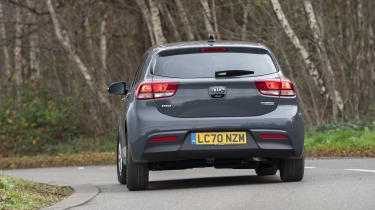 The naturally aspirated four-cylinder 1.2-litre engine is low on power and torque compared to the smaller capacity turbo units. In the real world, this will mean the engine (and five-speed manual gearbox) will have to be worked harder to get the best performance. Sprinting from 0 to 60mph takes quite a while (12.7 seconds to be exact) and top speed is 108mph. Despite the modest performance numbers, the engine is reasonably refined when kept at the slower speeds typical of urban streets.

The mild-hybrid three-cylinder 1.0-litre turbo unit produces just one more brake horsepower than the old (discontinued) 1.4, but significantly more torque at 200Nm. With the engine matched to Kia’s six-speed manual gearbox, such figures translate to a 0 to 60mph time of 9.8 seconds and a top speed of 118mph. Going for an automatic transmission adds 0.1 seconds onto the 0 to 60mph time but does nothing to the top speed.

The non-hybrid 1.0-litre produces 172Nm of torque but only 99bhp. Again using Kia’s six-speed manual ‘box, 0 to 60mph is claimed to take 10.0 seconds and top speed is 115mph. Going for an automatic transmission adds a second onto the 0 to 60mph time and 2mph onto the top speed. The extra torque of the 1.0-litre engines means the Rio can be much more flexible at lower engine speeds, and more refined thanks to the reduced need to rev it out. They aren’t the best three-cylinder turbo engines on the market by any stretch, but it injects some much needed urgency into the Rio’s driving experience.

The last diesel Rios to be offered by Kia came with a 1.4-litre CRDi engine. There were two power outputs to choose from; 76bhp or 89bhp. The latter offered the strongest performance thanks to 250Nm of torque available from just 1,500rpm. Regardless, shifting consumer demands called time on diesel-fuelled Rios in 2020.