One of two Bond cars to make this list, the Lotus Esprit wasn’t the fastest car Bond had, or the most desirable. 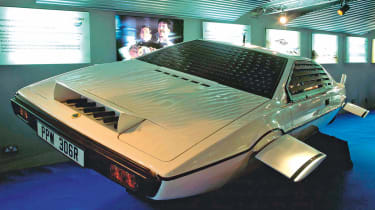 One of two Bond cars to make this list, the Lotus Esprit wasn’t the fastest car Bond had, or the most desirable. It only produced around 160bhp from its 2.0-litre four-cylinder engine and hit 62mph in 8.4 seconds, a time most hot hatches could eclipse today.

However, what the Esprit did have up its sleeve was a huge raft of gadgets. Not only did Bond have a cement sprayer hidden behind the number plate, but the car also had the scene-stealing ability to completely submerge in water and morph into a submarine. Once converted, the underwater Lotus was fully ready for combat, coming armed to the teeth with mines, torpedos and even surface-to-air missiles.

Elon Musk, founder and head of Tesla, bought the movie car for around £600,000. He aims to turn what is basically a movie prop into a proper submersible. He also added an ‘easter egg’ into the Tesla Model S’ operating system, a hidden feature revealed when you type in Bond’s 007 code number. After doing that, the submersible Esprit shows up on Tesla’s screen in the suspension settings and a “depth” drop-down menu appears.

The Lotus Esprit featured again in For Your Eyes Only, where Roger Moore drove a red Esprit Turbo with gold wheels. That model had 50bhp more than the S1, and launched to 62mph in a much faster 5.4 seconds.

Giorgetto Giugiaro originally designed the Esprit and the car carried on being built by Lotus right up to 2004. The last Esprit models were fitted with a thumping twin-turbo V8.