Despite the increase in size the Clubman retains the classic MINI character, with nice steering and impressive body control

Despite its stretched-out dimensions, the Clubman still steers with the same enthusiasm as the MINI hatch. This eager character is a trait all MINIs possess, from the Convertible to the Countryman crossover.

The steering still has the same sharp feeling as on the MINI hatch, although it does feel a little light for our tastes. However, it responds keenly to fast changes in direction and never feels like it’s being asked to do something out of its remit. While the Clubman still resonates with that classic MINI feel, the engineers have really focused on is refinement and ride quality.

In the past, MINIs have been about as famous for their poor ride quality as for their engaging character, but MINI has looked to address that with the Clubman. It feels softer than any other MINI in the range and you can really feel that on the road. 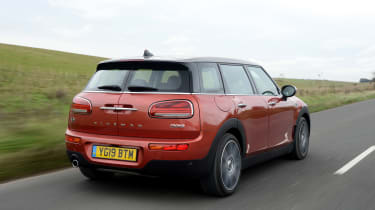 Hit a bump and where the standard three-door hatch would really thud into the road, the Clubman feels more composed when dealing with poor road surfaces. It's still firm compared to a VW Golf, but never uncomfortable.

What really helps is the addition of adaptive dampers, which let the driver switch between driving modes. They are around £700 extra but aren’t really needed – the standard set-up is more than up to the task.

The Clubman Cooper has a 134bhp 1.5 petrol, offering enough performance for most needs, a surprising amount of torque and decent efficiency. With a 0-62mph time of 9.2 seconds, it's more than adept at maintaining MINI's reputation for building nippy cars.

The more expensive 189bhp Cooper S isn't significantly more exciting, and doesn't sound or feel as fast as the hatchback version, although it does get a useful slug of extra torque produced lower down the rev range.