Bigger boot and more passenger space than before, but rivals are still more practical

The MINI Clubman is 270mm longer than the five-door hatchback, while the wheelbase is also 100mm longer, which adds much-needed legroom in the back. The ditching of the first Clubman's single ‘club door’ in favour of two conventional rear doors makes access to the rear seats far easier, although they don’t look quite as cool. The switch to the more orthodox design also opens up the Clubman to a whole new batch of potential buyers who may be considering a mainstream hatch like the VW Golf, Peugeot 308 or SEAT Leon.

Another area of improvement is the boot. While boot space in the Clubman is still not huge at 360 litres, it's 20 litres bigger than the old car and just about a match for those aforementioned rivals. Access to the boot is very impressive thanks to the split rear barn doors which open via a touch sensitive button hidden behind the chrome door handles. Just like a van, they only open one way, so you have to close the left-hand door before closing and locking the right-hand door. Fold the rear seats down and there’s 1,250 litres of space to play with. 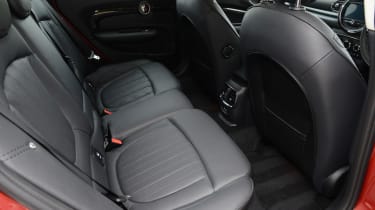 If you spec MINI’s Comfort Access option, a simple kick of your foot under the rear bumper opens the boot. It’s ideal if you have hands full of shopping. One drawback is that while the van-like rear doors are easy to use, they do restrict rear visibility when you’re on the move.

Proportionally that makes it slightly longer and wider than a VW Golf, but it is more compact than the Vauxhall Astra.

The gain in size will be immediately noticeable to those sitting in the Clubman. Not only is access to the rear greatly improved, but leg and headroom is also now on par with the Audi A3. Two adults will be more than comfortable in the back, but you can squeeze three in if you need to. If space is a priority then the Clubman won't really be for you, and you'll get better value by choosing the latest compact hatch-based estates. 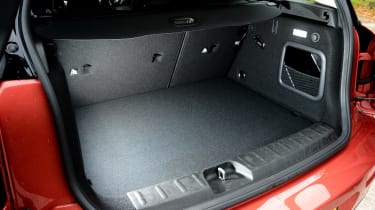 The 360-litre boot is a decent shape and with flat sides and a reasonable load lip, although that boot capacity isn't really outstanding. Drop the rear seats and space increases to 1,250 litres and the rear bench sits flush with the boot floor so sliding in longer, heavier items won’t be too much of a chore.