Unique inside and out, the Clubman still offers something different to the norm but without the compromise

From the A-pillars forward, the Clubman is identical to the five-door hatchback on which it's based. From that point backwards, the love-it-or-hate-it shooting brake body style is unique. It looks like an estate but proportionally it’s the size of a hatchback and is designed to look far more mainstream than the old Clubman model with its rear-hinged ‘club door’ on one side of the car.

Inside, the dashboard is pure MINI and it gets a unique design over the standard hatchback to mark it out as the more premium model. There are still lots of retro touches, including an LED trimmed center display and fighter jet-style toggle switches.

Below the centre console is a handy storage compartment, two USB plugs and two large cupholders ahead of the gearstick. The centre armrest can be folded up out of the way and can also be specced with an integrated mobile phone compartment. 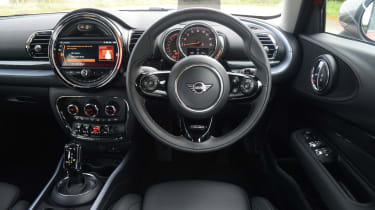 The Clubman has one of the best sat-nav and infotainment systems on the market. Being owned by BMW means MINI can take advantage of its parent company’s iDrive system, which is based around a very intuitive swivel wheel down on the centre console.

Don’t be frustrated by the lack of a touchscreen, as this system is far easier to use and stops those nasty smudges from appearing on the screen. Entry-level models get a 6.5-inch colour display, while a larger 8.8-inch screen comes on high-spec models. It serves as a display for infotainment, phone and navigation functions. Apple CarPlay is included but there's no support for Android Auto.