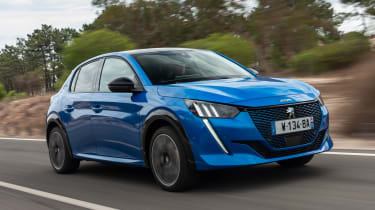 The Peugeot e-208 is a cute and comprehensively high-tech small electric car that feels fun and youthful in a way that few rivals do. It’s just a shame that others go further between charges, and that the knobbly ride comfort and lack of cable storage let it down.

Peugeot’s got an interesting take on the electric car. While rivals such as Renault, Nissan and VW are going down the route of delivering electric cars on bespoke platforms with deliberately different styling – step forward the ZOE, Leaf and ID.3 – Peugeot is reassuring its customers that electric power is normal. Nothing to fret about. Just the next step. Hence the new 211-mile e-208 looking, feeling and driving in very much the same way as the petrol equivalent.

And the French maker could be on to something. Giving a slightly bewildered car buying audience something so recognisable and familiar will come as welcome reassurance for many. Even better news is that it’s very competitively priced, starting at just over £25k, or £26,250 with the mid-range Allure trim that we’d recommend, or from around £330 a month with a deposit or part-ex of £4,500.

It’s cohesive and likeable to drive, too. Sure, the 0-62mph time of 8.1 seconds doesn’t sound like much but stick the willing electric 208 in Sport mode and it razzes off the line with satisfying vigour, and it has a heartier mid-range response than you’ll enjoy in the likes of the Renault ZOE, too. 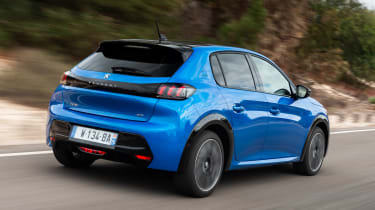 The trademark small Peugeot steering wheel is still an acquired taste, but it does give the e-208 an enthusiastic wieldiness that suits town or country road alike. Mild brake regen’ forces feel very natural right from the off, or you can increase that by nudging the gear lever into ‘B’ mode.

What’s less ideal is the ride comfort. Our top-spec GT test car rode on 17-inch alloys and it was a bit restless and lumpy over the scrappy Portuguese roads that we drove on, even if it settled enough at higher speeds to deliver relaxing motorway manners. Tyre and suspension noise, too, was noticeable, although the innate refinement you get from the silent electric motor means that this is still a quiet car by the standards of any petrol competitor.

More than the way it drives, it’s the way it looks - inside and out - that’s likely to sell the assertive-looking e-208. The interior has a smart, tactile blend of contrasting materials and colours that feel modern and fresh without being too garish, and complement the very tech-focused dash.

A 7-inch touchscreen with Apple CarPlay, Android Auto and Mirrorlink is standard across the range. Then a 10-inch version with TomTom nav and live traffic updates is £650 extra on most trims or included on top-spec GT.

It can be tricky to figure out the menu layouts, and it still seems counter-intuitive to have to leave your nav screen to change the cabin temperature, but otherwise the standard equipment and graphics are great. You even get multiple USB charging sockets in the front and back, and in all but the base model there’s wireless phone charging and a snazzy configurable driver’s readout with ‘3D’ graphics that look very cool and are easy to read. 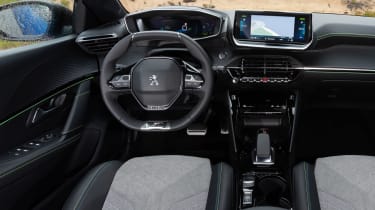 The e-208 is easy to charge, too. A CCS and Type 2 port pops open on the rear wing, and lets you charge up at most public charging stations or at a home wallbox. That 7kW wallbox will charge the e-208 in some eight hours, while the car also gets 100kW rapid charging that’ll add 100 miles to the range in around 20 minutes (40 minutes at one of the more common 50kW fast chargers).

Mind you, a cable giving you access to standard three-pin domestic sockets costs extra, and there’s nowhere to store any of the cables in the car, either. It’s also a glitch in the Peugeot’s matrix that the updated Renault ZOE has arrived with a longer official range of 245 miles.

Even so, our brief test drive suggested that the Peugeot will cover 200 miles in summer real-world driving (expect around 150 in winter or on long motorway journeys), and that’s more than enough for most motorists thinking of going electric.

Overall, the e-208 has got a youthful, energetic feel that rivals like the ZOE can’t lay claim to, so while there are niggling frustrations to contend with, it’s still a great addition to the small car class.