Vauxhall Frontera - the worst cars ever

An early crossover SUV, the Vauxhall Frontera was ahead of its time in some ways, but horribly behind in others 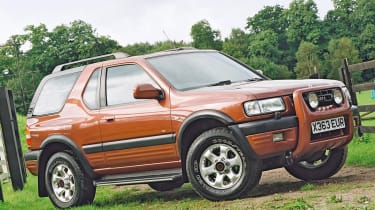 Car makers have always tried to take a fast track into new categories to make a quick buck. And while the current demand for SUVs and crossovers is the strongest it's ever been, Vauxhall attempted to make an impact with its own SUV model in the 1990s.

The Vauxhall Frontera was the product of another misguided partnership, this time between Vauxhall's parent firm General Motors and Japanese maker Isuzu. GM used Isuzu's 4x4 expertise, chiefly in the form of the Isuzu MU off-roader, to create its own SUV for Europe. The MU wasn't just used by Vauxhall, though, because the car was sold across the globe under assorted names.

As well as being called the MU (which stood for Mysterious Utility), it was sold by Isuzu in the US as the Amigo and Rodeo Sport, and in South America as the Frontier. Then there were the badge engineered models, starting with the Vauxhall Frontera. Other versions included the European Opel Frontera, Australia's Holden Frontera, the Chevrolet Frontera in Egypt and Chevrolet Rodeo in Central America. And finally, there was the Honda Jazz. Yes, really, the MU was sold in Japan with the same name as Honda's supermini in the UK.

UK Fronteras were built in the UK at the old Bedford factory in Luton, Beds, alongside their Opel and Holden counterparts. But this was one car where Made In Britain didn't spell a quality product. The Frontera was rushed to market, and with woeful on-road handling, and a range of thirsty and unreliable petrol and diesel engines, the car didn't have many redeeming features at all.

Poor handling, whether you chose a short or long wheelbase version, was just part of the story. A bouncy ride meant the car was uncomfortable, too. The cabin was cramped on the short-wheelbase model, while the boot was compromised by a side-hinged tailgate. You'd be lucky to get more than 20mpg through regular driving - that's if you had the car back from the garage long enough to drive it, because the only off-roading most Fronteras would do would be up on jacks to get it repaired.

The first Frontera was built from 1989-1997, and despite its poor reputation, it was replaced by a second-generation model. That car was marginally better than the original, but it also had too many faults to be taken seriously. The Frontera name was consigned to the history books in 2004, while its replacement, the Vauxhall Antara, arrived in 2006.