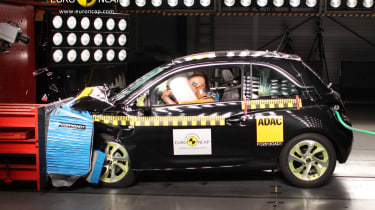 Crash tester Euro NCAP has released its latest round of results – and the Vauxhall Adam has only scored four stars.

The stylish supermini was the only model of the five cars on test not to score 90 per cent or higher for adult protection, achieving a mark of 87 per cent.

It was also awarded the lowest mark for pedestrian safety – with a score of 65 per cent – and the joint lowest score for child safety, with a mark of 72 per cent.

The Mitsubishi Mirage could also manage just four stars. While the Mazda 6, Lexus IS 300h and Toyota Corolla all scored the maximum five stars.

The Adam’s low score will be a big blow to Vauxhall, as key rivals – like the Ford Fiesta, Volkswagen up!, SEAT Mii and Peugeot 208 – all achieved five-star safety ratings.

But it is increasingly common for superminis to fail to pass crash tests with five stars. Of the 11 superminis tested in 2012 and 2013 to date, less than half have managed full marks.