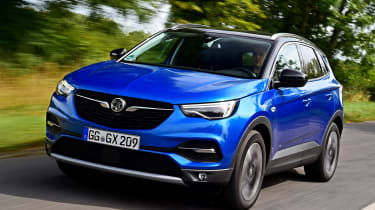 The Grandland X is Vauxhall’s most convincing crossover yet. This Nissan Qashqai rival is the final piece in the firm’s SUV line-up, and mixes space, comfort and practicality in equal measure. While it isn’t the most rewarding car to drive, it should satisfy many family car buyers’ wish lists. We’d avoid the top-spec Elite Nav and opt for the better-value SE trim, however.

If you ignore the Opel badges on the inside, the car you see here is the production-ready version of Vauxhall’s all-new Nissan Qashqai rival, the Grandland X.

The new crossover was revealed earlier this year, and it’s the third SUV in Vauxhall’s growing line-up. Born from a joint venture that was arranged before PSA Peugeot Citroen took over as owner of Vauxhall/Opel, the Grandland X is based on the same platform as the Peugeot 3008. It shares many parts with the French crossover, and comes with a similar range of engines and gearboxes. Here we try the Grandland X powered by a 1.2-litre turbo petrol engine.

Those familiar with the 3008 will notice a few parts have been lifted from the Peugeot unchanged. The starter button is identical, for example, while many of the warning lights and illuminations on the dash are the same, too. The screen, dials and centre console design are all unique, however. 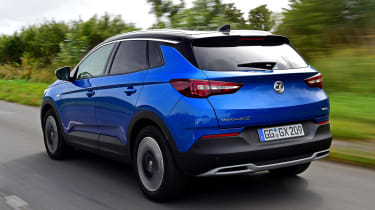 Our experiences with Peugeot’s quiet and punchy 128bhp PureTech petrol engine are emulated in the Grandland X. It’s our first taste of the new Vauxhall, but given the three-cylinder turbo’s strong performance and reasonable running costs, it’s likely to be the pick of the range when it goes on sale in January. It feels more refined than in the smaller Crossland X, thanks in part to the superior six-speed (rather than five-speed) box. A 118bhp 1.6-litre diesel is also offered.

However, like the Crossland X, the Grandland X’s controls are all very light. The clutch and steering don’t need much effort, and the gearbox isn’t particularly precise. There’s lots of body roll, too, and while there’s plenty of grip, it isn’t much fun to throw through a series of fast bends. It’s clear Vauxhall’s engineers have prioritised comfort over driving dynamics; a SEAT Ateca is more rewarding to drive.

But if you take it for what it is, the Grandland X is a comfortable and capable cruiser, with fine urban and motorway manners. Where the soft suspension wallows through corners, it offers a smooth ride over rougher surfaces. Sharp high-speed jolts and potholes are well damped, too, even on our test car’s 18-inch wheels. 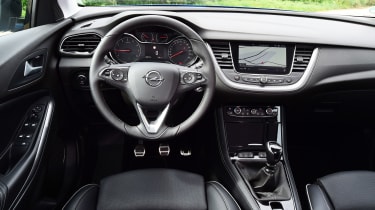 UK-bound Elite Nav models will get 19-inch rims, but there appears enough cushion to suggest that these shouldn’t ruin the ride too much. There’s a bit of wind noise around the door mirrors, although you only notice that due to the markedly hushed powertrain and otherwise quiet cabin.

The lifeless steering has its advantages, making the crossover simple to manoeuvre. Top-spec cars get a handy reversing camera, which helps compensate for the blind spots created by the car’s swooping roofline. The plush leather seats lack side support, however, and the raised driving position leaves you feeling as if you’re sitting on (rather than in) the car. Still, the Grandland X is no more cumbersome than any of its rivals.

Perceived quality is good, if a little shy of the class leaders. The dash plastics are squashier than anything in this market, in fact, although they can’t distract from some scratchier materials lower down in the cabin. The central touchscreen is responsive, while the simple layout is easy to use when on the move. All cars come with Vauxhall’s excellent OnStar concierge package, which can help you get home, or call the emergency services in the event of an accident. 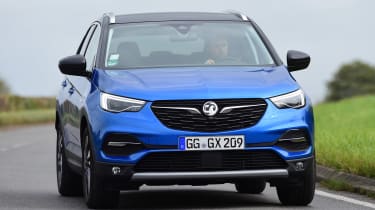 Space in the back is excellent, and growing families will appreciate the flat floor, which allows passengers to sit three-abreast for short journeys. There’s loads of head and legroom, and it never feels too dark or cramped.

At 514 litres, the big, wide boot is a boon, too. With the seats in place the Grandland X offers a marginally larger load bay than a 3008 by two litres, but fold them flat and there’s an extra 48 litres. In fact, the total 1,652-litre area is on par with some cars in the class above. A five-seat Hyundai Santa Fe, for example, provides 585 litres with the seats up and 1,680 litres when they’re down.

But as with any family car, whether it sinks or swims for Vauxhall will depend on how much it costs to buy and run. The top-spec Elite Nav’s list price seems high, although standard equipment is good – with an eight-inch touchscreen sat-nav, LED lights and climate control. This trim also includes leather seats, tinted windows and keyless go. But even the entry-level SE boasts Apple CarPlay and Android Auto (and thus access to maps), as well as alloy wheels, rear parking sensors and cruise control. It’s more than £4,000 cheaper, too, so the monthly rates on one of Vauxhall’s PCP finance schemes will be attractive.

The Elite Nav’s 19-inch wheels bump up CO2 emissions, so it sits in a higher company car tax band than its SE or Sport Nav siblings. Fuel economy of 52.3mpg is competitive, if slightly shy of the Peugeot, but in mixed motoring the differences will be marginal. The Grandland X diesel claims to return more than 70mpg, however.