The new 296bhp Vauxhall Grandland X Hybrid4 plug-in promises performance and economy, but is simply too expensive to justify 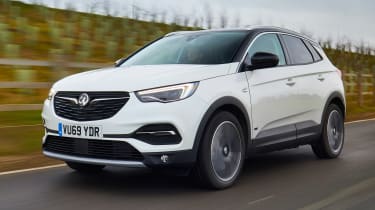 The Vauxhall Grandland X Hybrid4 is clearly a model aimed at company car users focused on kit lists and Benefit-in-Kind tax rates over driving dynamics and residual values. The cheaper front-drive edition should make more sense for everyone, but even as a company car choice, this £46k Hybrid4 model will struggle against cheaper, more premium rivals such as the BMW X2 xDrive25e.

The Vauxhall Grandland X Hybrid4 is another step in the firm’s electrification. It’s a plug-in family SUV that’s designed to do daily commutes on electricity, with petrol power available for longer runs.

The Grandland X is built on the same  platform as the Peugeot 3008, and it uses the same PHEV powertrain, which means this Vauxhall is pretty brisk for a mid-sized SUV, in a straight line at least. It uses a turbocharged 1.6-litre four-cylinder petrol engine, and there’s an electric motor for each axle – so it’s the only four-wheel-drive model in the range – and it offers a combined output of 296bhp. There’s also a healthy 520Nm of torque on tap, which makes it easy to exploit gaps when overtaking.

The sprint from 0-62mph takes a hot hatch-troubling 5.9 seconds, while its top speed stands at 146mph. In-gear acceleration is good, too, thanks to the instant torque from the electric motors, although the eight-speed automatic gearbox can be a little slow to kick down under heavy throttle use. 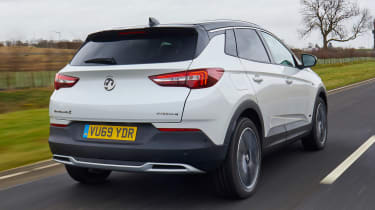 Unfortunately, the Grandland X isn’t very comfortable. Due to the added weight of the battery pack and electric motors, the Hybrid4 is around 300kg heavier than a conventionally powered model. Vauxhall has fitted a set of firmer springs and dampers in an effort to control the added bulk, but this has hurt the car’s ride quality.

It’s very unsettled, even on smooth roads, while expansion joints and rumble strips send shudders through the cabin. The dampers also can’t cope with harsher imperfections, so they bottom out over large potholes and road dips. The issue is worsened by the 19-inch alloys and low-profile tyres fitted to the top-spec model.

Surprisingly, the Grandland X can tackle a spot of light off-roading. Vauxhall has added a four-wheel-drive setting for the SUV’s PHEV powertrain that locks the front and rear electric motors together to maximise traction. Our test route took us through a waterlogged green lane in Windsor, which the Grandland X Hybrid4 dispatched with relative ease. It’s not a Defender rival, but for a family SUV, it’s not bad. 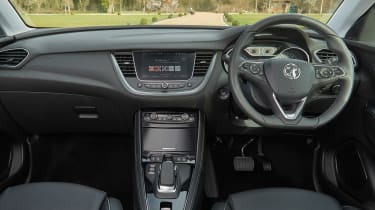 Overall the Grandland X plug-in is a mixed bag, but it’s pegged back by its cost. It’s priced to compete with premium rivals, such as the Mercedes GLA and Audi Q3, and starts from £36,790. However, this range-topping Ultimate Nav variant weighs in at an eye-watering £46,650.

That’s expensive in anybody’s book, although later this spring Vauxhall will introduce a two-wheel-drive Grandland X PHEV with a single front-mounted electric motor. Its pure-electric range will be a mile off the Hybrid4’s 35 miles, and it’ll emit a single g/km more of CO2. But it will also be between £3,000 and £4,000 cheaper.

The Hybrid4’s everyday running costs will be dependent on how often you plug it in, and a reasonable charge time of just under two hours is possible from a 7.4kW wallbox. Rather cheekily, though, Vauxhall doesn’t supply a faster charger as standard; if you want to top up with anything more than the weedy three-pin charging cable, you’ll have to fork out a further £500.

Things take another downturn when you scrutinise the interior. The flagship model’s cabin isn’t as well finished as its price tag would suggest. The infotainment system is shared with countless other PSA products, and isn’t as sharp as BMW or Audi’s units – although at least conventional climate controls are included. But the fit and finish falls short of premium rivals’, and there are analogue gauges where, at this price, you’d expect a digital instrument binnacle.