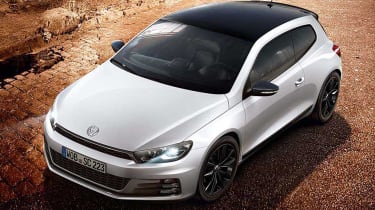 Volkswagen has revealed two new special edition VW Scirocco models with a handful of cosmetic upgrades for £550 more than the equivalent standard cars.

The Scirocco GT Black Edition and Scirocco R-Line Black Edition are based on the GT and R-Line trim levels, but feature, as the name implies, some black exterior add-ons.

Black alloy wheels, a black contrast roof, black door mirrors, a black rear spoiler, and 90 per cent tinted (that's black to you and me) rear windows are standard on both special edition cars. The GT model gets 18-inch alloys, while the R-Line model gets larger 19-inch rims.

Move up to the R-Line model to get sportier bumpers, side skirts and scuff plates, plus an R-Line steering wheel, handbrake and gear lever and heated leather sports seats.

Both special edition models are one sale now, from £23,135 for the GT Scirocco Black Edition with a 1.4-litre TSI engine.

What do you think of the VW Scirocco Black Edition? Let us know below...