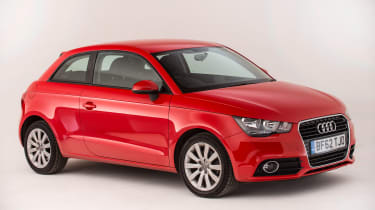 The A1 quickly built up an impressive trophy cabinet, with awards from Auto Express and our sister site Carbuyer. It’s easy to see why, as Audi’s smallest car offers the same build quality, excellent ergonomics and hi-tech features as the brand’s bigger models. This upmarket supermini is more common than you might think, too, with around 3,000 used A1s for sale in the UK. However, you’ll struggle to find any bargains, because while it’s easy to spend plenty on a new example, strong residuals mean used values tend to be high. But as with so many things in life, you get what you pay for.

Some manufacturers build their smaller cars to lower standards to save cash, but not Audi. So when you buy an Audi A1, it’s made with the same attention to detail as an A4 or Q5; you just pay for the privilege.

This model is definitely a premium product, so if you’re strapped for cash, you’ll have to shop elsewhere. But if you can afford one, the A1 is a great alternative to some of the more obvious luxury small cars out there. When we ran a 1.4 TFSI on our fleet, it proved very popular thanks to its perky engine, high-quality cabin, and strong comfort and refinement.

The A1 was Audi’s first venture into the supermini market. It launched in 2010 and has been on sale for eight years to date. 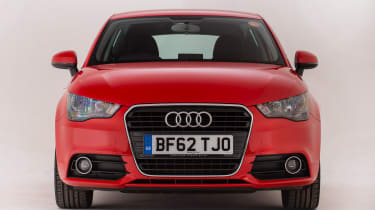 The A1 debuted in three-door hatch guise in late 2010 with 1.2 TFSI or 1.4 TFSI petrol engines, or a 1.6 TDI diesel. All had manual gearboxes, and the 1.4 initially delivered 120bhp, but soon after a 182bhp edition with an S tronic dual-clutch auto arrived.

A November 2014 facelift brought styling tweaks, extra kit and cleaner engines to the A1 range, including a 1.0-litre TFSI three-cylinder petrol unit to replace the 1.2 TFSI. From this point on, the S tronic dual-clutch gearbox was available with any engine.

None of the engines is weak, and all offer decent economy; the 1.2 TFSI and 1.6 TDI provide better performance than you might expect. The seven-speed dual-clutch box is great to use as it provides manual control with fast automatic shifts and virtually no fuel consumption penalty. All A1s come with alloy wheels, electric windows, ESP, air-con, height-adjustable front seats and an eight-speaker CD/tuner. 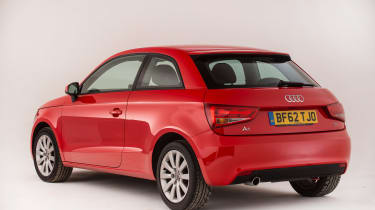 Alternatives to the Audi A1

The MINI is the A1’s most obvious rival, yet it has a much smaller boot. Plus, the five-door arrived only recently, so prices remain high. The DS 3 plays the value card heavily, and it’s more stylish and spacious. There’s no five-door option, but you’ll get more for your money and a bigger boot.

Alfa Romeo’s MiTo is sporty and stylish, although it’s not very practical and suffers disappointing ergonomics. The Fiat 500 has universal appeal, while the Abarth editions are fast and distinctive. While it’s cute, fun to drive and reliable, the 500 comes only as a three-door, and practicality is poor thanks to its small boot and cramped back seats.

The A1’s cabin has the same upmarket feel as Audi’s bigger models, and it’s well laid out. Space is good in the front, but rear head and legroom are tight in three-door cars and access is awkward, too. The boot holds 270 litres – more than a MINI but less than a DS 3. 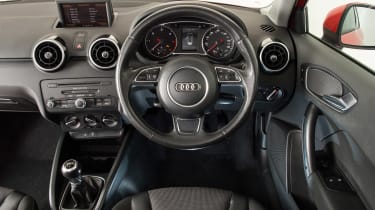 Rattles from the front doors point to the linkage for the door lock mechanism moving about. It’s simple enough to fix the issue, though; all you need is a cable tie.

Not all A1s came as standard with heated door mirrors, much to the apparent disappointment of owners, who have set up a campaign to get them retro-fitted.

On cars equipped with xenon lights, the Perspex headlamp housing can mark through overheating. This problem can be fixed under warranty.

Instead of a spare wheel, there’s a compressor with sealant. Depending on which options the original owner selected, there may be no room for a spare wheel in the A1. 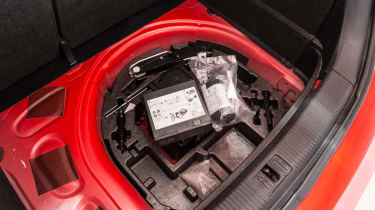 Owners can choose between fixed or variable servicing. The former means a check every 9,000 miles/12 months, while the latter allows up to 19,000 miles and two years. Fixed services cost around £185; variable check-ups are around £290. Cars over three years old are eligible for fixed-price servicing, at £159 (interim) and £309 (major); it’s worth buying a car with a pre-paid servicing package.

Only diesel models have a cambelt, which needs to be replaced every five years or 75,000 miles; on later cars, this stretches to 140,000 miles. Dealers charge £731 for a new belt with a fresh water pump, or £572 without the pump; these prices drop to £599 and £455 respectively from a car’s third birthday. 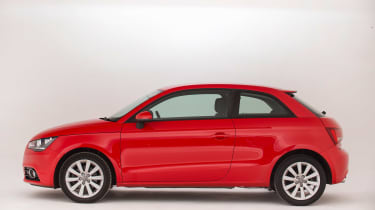 Even though the A1 is nearly six years old, it has yet to be recalled. Despite Audi’s extensive model range, the company has issued just nine recalls in total since the A1 arrived, although some affected more than one model.

The kinds of issues that have forced recalls on bigger Audis include fuel leaks, airbag glitches and glass roofs shattering or leaking. Some models have suffered from brake servo problems, leading to a loss of braking assistance. But the A1 has been immune to all this.

The A1 rose two places to 150th in our Driver Power 2016 survey, which is disappointing for a premium car that’s still relatively new. It managed two top 100 category ratings, for build quality (73rd) and performance (71st); 109th place for running costs, 128th for reliability and 106th for handling are poor.