The Audi A3 Sportback won't break the bank to run; even the S3 and RS3 models claim commendable fuel economy 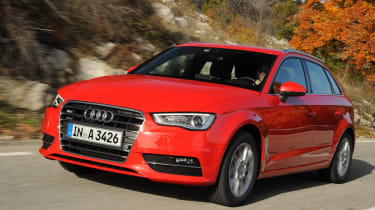 Petrol versions of the A3 Sportback are impressively efficient. When equipped with a manual gearbox and low-rolling-resistance tyres on 16-inch wheels, the 1.2 TFSI claims 57.6mpg fuel economy and 114g/km CO2; specify the S tronic dual-clutch auto, and these figures improve to 58.9mpg and 110g/km. Even on 18-inch wheels and regular rubber, the car promises a respectable 55.4mpg with either gearbox, as well as 119g/km in manual guise and 118g/km with the S tronic.

Indeed, where it’s an option, the auto ensures the petrol A3 Sportback is either as green or even slightly cleaner than the equivalent manual. The 123bhp 1.4 TFSI is at its most efficient on 16-inch wheels with an S tronic box, claiming 57.6mpg and 113g/km; in manual guise with 18-inch alloys, official figures stand at 52.3mpg and 124g/km. 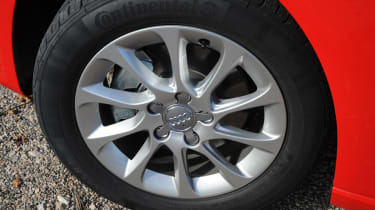 Meanwhile, the S3 and RS3 are more efficient than their supercar-baiting pace would lead you to believe – especially the former. According to Audi, the 296bhp 2.0-litre engine in the S3 emits 159-164g/km of CO2 and is capable of 39.8-40.9mpg, depending on the gearbox and whether it’s on 18 or 19-inch wheels. These wholly reasonable numbers are not far off the much less powerful 1.8 TFSI.

The RS3 is naturally thirstier, but Audi claims it’s 12 per cent cleaner than its 335bhp predecessor, quoting 34.9mpg and 189g/km on the 19 x 8J alloys. Go for the optional rims that are half an inch wider, and consumption, emissions and Benefit in Kind company car tax all increase.

Yet as efficient as all the petrol engines are, the diesels are the eco stars of the A3 Sportback range – and none more so than the 1.6-litre TDI Ultra, which claims 83.1mpg economy and CO2 emissions of just 89g/km. The 1.6 TDI with an S tronic box is the only other model to be exempt from road tax, if you can stick to 16-inch wheels on the low-rolling-resistance tyres, thanks to its 99g/km emissions. It also has an official economy figure of 74.3mpg.

According to Audi, the 148bhp 2.0 TDI returns 68.9mpg and emits 108g/km in front-wheel-drive, manual guise, on 16-inch wheels, although official economy figures for most 2.0-litre diesel versions of the A3 Sportback range from around 60-65mpg.

Quattro all-wheel drive has a big, negative impact on economy and emissions. When you compare the 1.6 TDI Ultra to the quattro equivalent, CO2 jumps by 30g/km to 119g/km and economy tumbles from 83.1mpg to just 62.8mpg. It’s the same story at the other end of the diesel range, where the manual 181bhp 2.0 TDI promises 67.3mpg and 112g/km; the quattro version – which only comes as an S tronic – claims 58.9mpg and 127g/km.

For the ultimate in fuel-saving technology, the plug-in hybrid A3 Sportback e-tron will be the choice. On 17-inch alloys, Audi quotes an astonishing 176.6mpg and CO2 emissions of just 37g/km. That means a Benefit in Kind rate of five per cent. However, the e-tron isn’t a cheap car to buy, at over £30,000 even after the Government’s Plug-In Car Grant has been deducted, and before you add any options.

With plenty of electronic driver aids as standard – and more on the options list – plus the safety net of quattro all-wheel drive, insurance premiums for the A3 Sportback can be kept low. The range kicks off at insurance group 17 for the 1.2 TFSI and rise to group 40 for the RS3; for reference, the e-tron sits in insurance group 29.

As a premium product, the Audi A3 Sportback costs more to buy than the mainstream models in this class, including its Volkswagen Golf cousin, as well as the Ford Focus and the Vauxhall Astra. However, the Sportback benefits from strong residuals, meaning you’ll get more of your cash back when it’s time to sell.