Although not exactly eco-friendly, the RS 6 includes a mild-hybrid system to improve efficiency 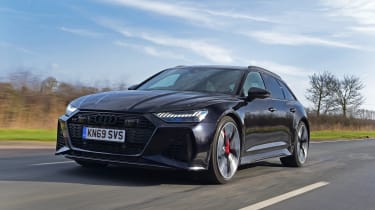 You don’t buy an Audi RS 6 expecting a great return on a tank of fuel, but at least Audi has offered, by way of mitigation, new 48-volt mild-hybrid tech to help ever-so slightly alleviate the pinch at the pumps.

The hybrid technology includes a system that shuts-off the engine on the move between 34 and 99mph to save fuel. On top of this, there’s also cylinder-on-demand (CoD) deactivation tech that shuts down half the V8 under light throttle loads.

The official combined cycle economy for the RS 6 is 24.6mpg. It's an impressive figure for a car with this kind of capability but real-world returns are unlikely to reach that level unless you're very careful. CO2 emissions are 263-268g/km.

As you might expect with such a premium car, all models are in the top bracket for insurance, at group 50.

The RS 6 is certainly expensive to buy and, while its value won’t plummet, it doesn’t perform quite as well as its Porsche Panamera rival. Our experts predict the Audi will retain an expected 51.8 percent of its purchase price after three years, while the Panamera Turbo Sport Turismo will hold onto 52.2 percent.