Foreign cars: the best cars we don’t get in the UK

You’ve had your say. Now we can reveal which foreign-market models manufacturers should sell here in the UK 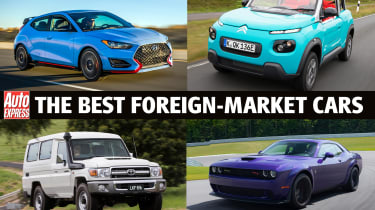 Car companies don’t always make the right market decisions. The Jetta, for instance, is so popular in China that Volkswagen has plans to make it a new sub-brand over there, yet the car was axed from the UK in 2017 after poor sales – and that got us thinking: could it work the other way round? Are there foreign cars available in other parts of the world that you’d like to have here?

To see if any could be a hit, we compiled a list of 10 such models and asked you to tell us your favourite in a poll at autoexpress.co.uk. Your votes are in, and here are the results. 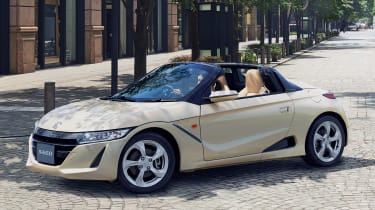 Where can you buy it? JapanWhy should we have it? It’s a rear-wheel-drive mid-engined roadster – the format of a Ferrari for the price of a Fiesta, in other wordsPredicted UK price: £16,500Chances of getting it? Zero. Honda UK told us, sadly, that this is not going to happen

We asked and you answered. The Honda S660 was the most popular car in our poll, and should definitely come to the UK. But unfortunately, Honda told us that such a decision will not be made. To be fair, Honda isn’t alone in denying the UK a kei car – a model that, in Japan, must be below a certain size and power to qualify for insurance and tax breaks. The likes of the Daihatsu Copen and Suzuki Cappuccino – which were sold over here – may be mourned by some, but not by enough for any maker to put a kei back in the UK. We think it’s time that view changed, and the S660 is the perfect car to make that happen. 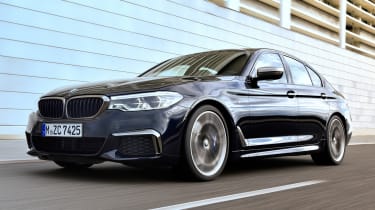 Where can you buy it? USAWhy should we have it? It’s an executive express designed for those who find the M5 too shoutyPredicted UK price: £60,000Chances of getting it? High, but you’ll have to wait a year

If your vote helped secure the 450bhp M550i xDrive a silver medal in our poll, we’ve some good news: BMW is bringing it to the UK next year. And while that means it arguably shouldn’t be on this list, we want to keep the pressure on BMW. After all, what model range is complete without a four-wheel-drive, 4.4-litre V8 drivetrain? Thanks to a 4.0-second 0-62mph time, a (very) subtle bodykit and performance clues such as blue calipers, the M550i is the perfect tonic for those who want nine tenths of the M5’s performance, but with a third of the attention. 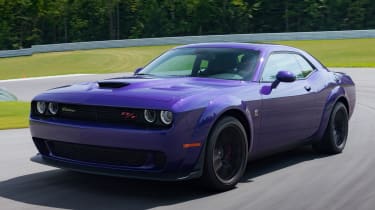 Where can you buy it? USAWhy should we have it? A bona fide muscle car with a range of increasingly outrageous power outputsPredicted UK price: £34,000Chances of getting it? Doubtful

We waited over half a century for Ford to offer the Mustang in right-hand drive, so don’t hold your breath for the Challenger being adapted to UK roads. If the range were sold over here, buyers could have the option of everything from the relatively affordable 301bhp 3.6-litre V6 SXT to the ludicrous 786bhp 6.2-litre SRT Hellcat Redeye. In no rational way can the Challenger be justified in the UK, but that doesn’t stop us hoping Dodge will dip its toes in the right-hand-drive pond. You agreed, voting this into third place. 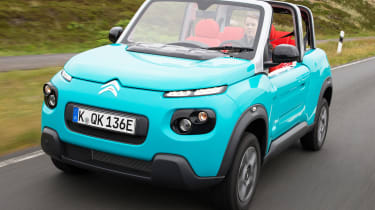 Where can you buy it? Continental EuropeWhy should we have it? Quirky, retro styling in a beach buggy-style electric vehicle – what’s not to like?Predicted UK price: £23,000Chances of getting it? If there’s a Mk2, perhaps

This is proof, if proof were needed, that Citroen is capable of producing cars other manufacturers wouldn’t dream of floating as concepts. The E-Mehari follows in the wheeltracks of its sixties 2CV-based namesake and it’s unique: a beach buggy-style EV with a hose-down interior and a removable roof. Even in its homeland it’s rare, but canny businesses use it for promotion. There are no signs the E-Mehari will come to the UK, but the growing popularity of EVs means a potential Mk2 version stands a (modest) chance of making it over here. 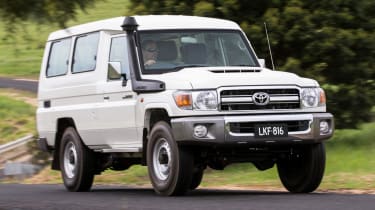 Where can you buy it? Australia, Nigeria, Morocco, Ghana and other African marketsWhy should we have it? Because it’s hard to think of a tougher vehicle that offers more practicalityPredicted UK price: £45,000Chances of getting it? Slim to none

We get the Land Cruiser – both on our roads and on a more philosophical level. But one Land Cruiser we don’t get in British showrooms is the ‘70’ model. Designed primarily for commercial buyers covering large distances in countries with unforgiving terrain, the fifth-placed Land Cruiser 70 is offered with a 4.5-litre V8 diesel engine and a 180-litre fuel tank. It’s available in utilitarian WorkMate, flat-bed GX and even troop carrier guises, but the rugged-yet-plush GXL model gets our vote – okay, Toyota? 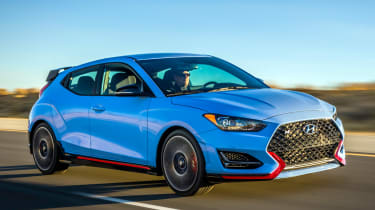 Where can you buy it? North America, KoreaWhy should we have it? It’s a quirky coupé reworked by Hyundai’s impeccable N divisionPredicted UK price: £28,000Chances of getting it? Potentially – if i30 N sales take off in a big way

With ex-BMW M boss Albert Biermann behind their handling, the i30 N hatchback and Fastback were always going to be special cars. But there are already two N models in the UK, so Hyundai’s decision not to sell the Veloster N here is fair – not least because the asymmetric three-door bodyshell would have to be redesigned. Still, it’s a shame; the more N models the better, we say, although a lowly sixth place in our poll suggests Hyundai might be right – for now. 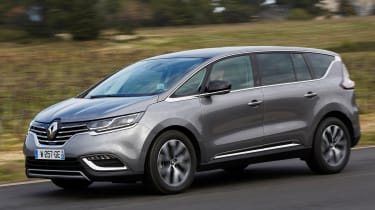 Where can you buy it? Mainland Europe, ChinaWhy should we have it? Plush, spacious and clever, the Espace has it all – except UK availabilityPredicted UK price: £35,000Chances of getting it? Low – unless MPV sales buck up

Given that the letters MPV are, more often than not, replaced with SUV these days, Renault’s decision not to offer the Espace in right-hand drive is probably wise – although Brit buyers are missing out. With Nappa leather seats, four-wheel steering, a vast panoramic roof and seating for seven, the Espace is a luxurious and cutting-edge family car. Factor in details like the swan-neck gear selector and the artfully designed rear end, and a French manufacturer has shown, once again, that style can come in all shapes and sizes. 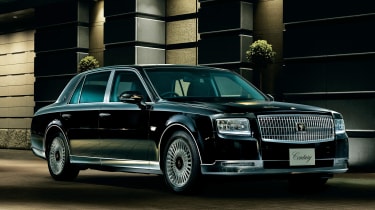 Where can you buy it? JapanWhy should we have it? Because it’s a hybrid V8 Japanese limousine available with velour seatsPredicted UK price: £135,000Chances of getting it? Non-existent

The Century is a special car. So special, in fact, that Toyota only sells it in its homeland and makes just 600 examples a year. Beloved of high-ranking Japanese officials, the Mk3 Century features a unique phoenix emblem that takes six weeks to engrave, ruched privacy curtains and a paint finish designed to mimic Japanese lacquer craftsmanship. Overall, the effect is one of timeless luxury with a curiously humble edge. The Century would be a wonderful addition to the UK, even if the V12 engine of previous models is long gone. 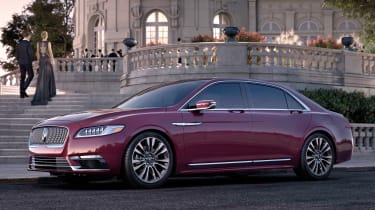 Where can you buy it? USAWhy should we have it? Big Lincoln represents true American luxury for the modern agePredicted UK price: £40,000Chances of getting it? Not unless Lincoln launches here

Modern Cadillacs – previously a byword for American opulence – look almost humdrum next to the latest Continental. The decadence starts from the moment you open the door; just touch a chrome strip and an electric motor releases the latch. Inside, high-quality leather and luxury veneers are complemented by seats that offer arguably more adjustment than anyone could ever need. The car even looks as if it could give potential German rivals a run for their money – not something we’ve been able to say about an American luxury car for some time. 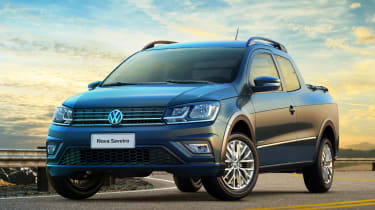 Where can you buy it? South AmericaWhy should we have it? A no-nonsense, affordable pick-up with VW qualityPredicted UK price: £10,000Chances of getting it? Extremely slender

The South American car market is peppered with Volkswagens we don’t get over here. And although the Crossfox deserves a place in this list just because of its name, the Saveiro gets our vote – and not just because it brings the Chevrolet El Camino to mind. With an interior that can hold its head pretty high among more illustrious VWs, a payload of 712kg and the choice of single or double-cab bodies, the Saveiro would make an excellent addition to any commercial operator’s fleet in the UK. You disagreed, however, voting the Saveiro in last place.

What's your favourite foreign-market car? Let us know in the comments below...