Everything from the 2017 Shanghai Motor Show, with breaking news, new car reveals, concept cars and pictures 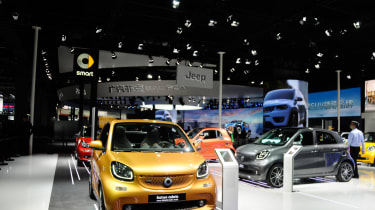 The 2017 Shanghai Motor Show treated us to a plethora of new production and concept cars set from some of the world’s biggest and best-known manufacturers. Gone are the days where Auto Shanghai was merely an excuse to laugh at China’s copycat cars aping western designs: some genuinely high-profile launches made this show a 2017 rival for those in Geneva, Tokyo and New York.

The boom in the Chinese car market has played a huge part in making the Shanghai Motor Show a very important event on the motor industry’s calendar, with billions being invested into the Asian market. Mercedes, Citroen, BMW and Skoda all had new cars at the show, while emerging, native marques like Lynk & Co - Geely’s new global brand - and SAIC's MG had concepts debuting too.

Our team was on the floor in Shanghai, digging out scoops and snapping exclusive pictures of this year’s biggest releases. Below is a round-up of all the important news from each manufacturer plus the big news headlines: simply click the links for more on each story...

The big breaking news stories from the Auto Express team on the 2017 Shanghai Motor Show floor...

What were the major car brands doing at the Shanghai Auto Show? Find out below with our full a-to-z guide to all the cars that matter... 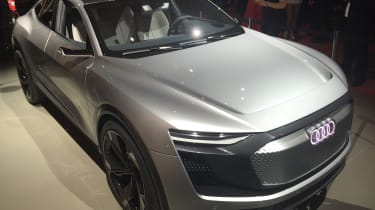 The second of three Audi electric cars that will be on sale by the end of the decade, the new e-tron Sportback concept has been revealed at the Shanghai Motor Show. Confirmed for production in 2019, the concept will enter what Audi is calling a ‘completely new segment’ for fully electric coupe SUVs. The e-tron Sportback will follow the production version of the e-tron quattro concept into showrooms, which arrives next year, and will sit alongside that model as a style-led alternative. For that reason the e-tron Sportback is based on the same MLB chassis – the same architecture that also underpins the Q7 SUV – rather than the VW Group’s new MEB architecture developed exclusively for electric vehicles. 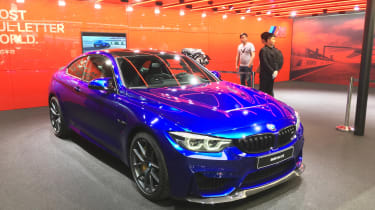 BMW has launched a more powerful, lighter and faster M4 at the Shanghai Motor Show. Production of the new BMW M4 CS is limited to two years and sales will begin later this year with prices starting from £89,130. Under the bonnet sits the same 3.0-litre twin-turbo straight-six, but BMW has tuned it to produce 454bhp – 29bhp more than the standard M4 and 10bhp more than the M4 Competition Pack. As a result, 0-62mph takes 3.9 seconds, while the top speed is electronically limited to 174mph. 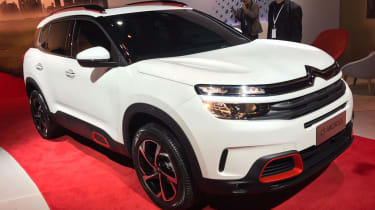 The French manufacturer has already begun to draw the crowds in Shanghai with a production version of the Aircross Concept, which was first shown in Shanghai in 2015. The Citroen C5 Aircross will take a radical departure from the outgoing C5 saloon, and will be a family SUV related to the Peugeot 5008. It'll rival cars like the Nissan X-Trail, with a plug-in hybrid powertrain on the way. 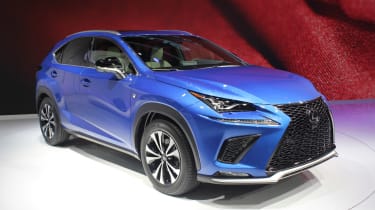 Lexus' now three-year-old NX crossover is set for a refresh and the brand has announced that it will make its debut in China. We don't have much to go on in terms of details, but the NX's "expressive styling" will be given a onceover and the brand has promised improvements to the interior that will "and convenience and functionality." 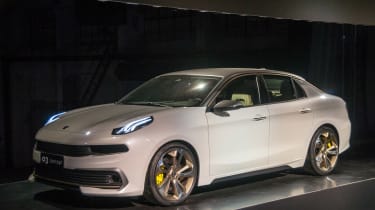 Geely will be a familiar name to Volvo fans, but the Chinese giant has also launched 'Lynk & Co' as a standalone global car brand. The 01 premium SUV is the company’s first production model, designed to cater for both Western and Eastern markets with world-beating connectivity tech promised along with a line-up of electrified powertrains. The 03 Concept saloon has also been unveiled at the show. 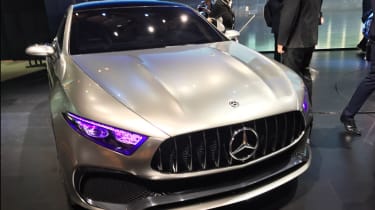 Mercedes has got the ball rolling at this year’s Shanghai Motor Show with the Concept A Sedan, which previews the next generation of the Mercedes A-Class. It’s longer, narrower and taller than the existing hatch, with the only familiar design feature coming from the Panamericana grille. Elsewhere, Mercedes is also using Shanghai to launch the 2018 S-Class, complete with radical autonomous technology. 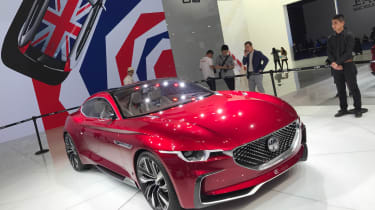 MG has launched a fully electric sports car concept called the E-Motion, and simultaneously given the green light to a production model which will follow at an unspecified time in the future. Details are scarce, but the E-Motion is said to be capable of 0-62mph in four seconds. 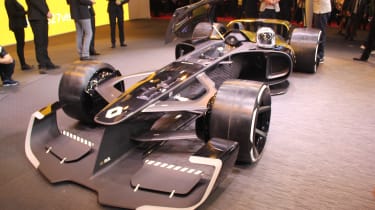 Renault is set to present its futuristic vision of what Formula 1 could look like ten years down the line by unveiling the R.S 2027 Vision concept, teased here. The teaser image previews new tech such as LED lights integrated into the front wing, and what looks like a glass canopy over the cockpit. It also suggests that Renault - which rejoined the Formula 1 grid as a full works team in 2016 - plans to stick around in the sport for some time. 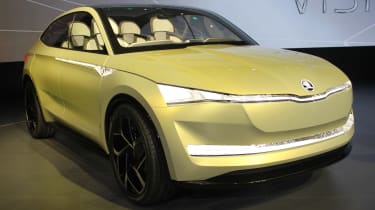 The Czech carmaker has given the Shanghai Motor Show an electric shock, as it has revealed its first EV to the world. It's called the Vision E, and has taken the shape of a sleek coupe-SUV. Based on the Kodiaq, the Vision E is powered by two electric motors producing 302bhp combined. In other news, Skoda may be considering a new name for the next generation of the Yeti, with a new ‘Karoq’ badge a possibility. 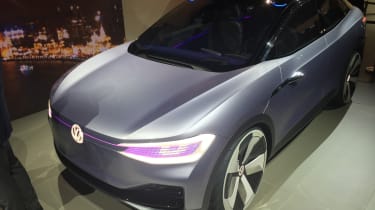 VW has revealed the third member of its EV family, a crossover concept called the I.D. Crozz. The claimed 310-mile range will dominate the headlines, but don’t ignore the fact that the Crozz is larger than both the first of the I.D. concepts and the current VW Tiguan as well. This concept is 40mm lower than the family SUV as well, but despite that VW says it can still match the Tiguan Allspace for cabin room.

• The best lookalikes at the Shanghai Motor Show 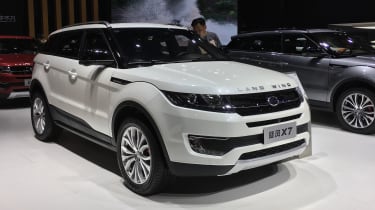 As is usually the case at the at the Shanghai Motor Show, we've spotted a number of models from Chinese brands that look very familiar indeed. We've selected a handful of the best doppelgangers on display, and have tried to match them up to their relevant twins. Prepare from some déjà vu...

The Auto Express team was in Shanghai to cover all the latest news and reveals, but what were the best cars at the show? We've picked our favourites below... 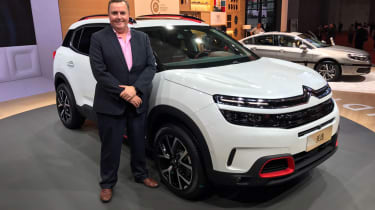 SUVs were ten-a-penny in Shanghai, mostly sporting familiar shapes and some a bit too familiar to others. But Citroen’s C5 Aircross is like a breath of fresh air, taking an original and innovative approach to the mid-size SUV.

It’s not only the striking exterior, though. The C5 Aircross takes Citroen Advanced Comfort to a whole new level with its new Progressive Hydraulic Cushion suspension system and even what look like tiny air bumps on the seats.

Citroen CEO Linda Jackson told me, “We want our interiors to really tempt people in when they open the door and then deliver on the comfort when they’re driving.”

Citroen’s comfort obsession is certainly a refreshing change from the many manufacturers who value sporty driving (with the resultant firm ride) above everything else. Let’s see if the C5 Aircross can deliver. 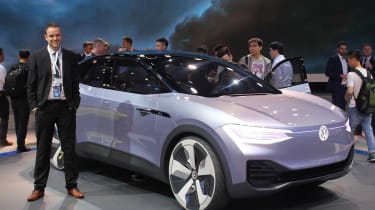 A trio of electric coupe SUVs from the Volkswagen Group all impressed in Shanghai. But while the Skoda Vision E and Audi e-tron Sportback both had their merits, it was the VW I.D. Crozz that particularly caught my eye.

Attractive styling and generous space meant it combined form and function well. And importantly, it’s no flght of fancy either. “This is not just a vision,” boss Herbert Deiss told me. “We will build this car. It will be on sale in three years and it is nearly production ready. There are only a few things that need to be resolved.”

It’ll be the second car to go on sale based on VW’s new MEB electric architecture – after the I.D. hatch – and I think it has the potential to be a winner. 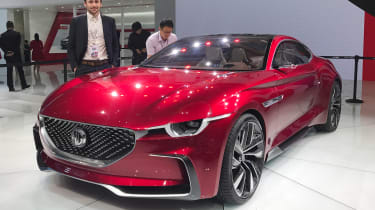 It feels like MG has been promising a return to its sports car roots for a lifetime, but finally this year’s Shanghai Motor Show showed that the iconic brand was coming through on its promise.

The E-Motion is the car MG fans have been longing for. The fact it is fully electric may not prove too popular with traditionalists but it’s this sort of technology MG needs to begin to adopt if it wants to appeal to a new breed of customers and enhance its global profile.

It also has fantastic looks. Aggressive angles and neat proportions give it some real visual impact and it should also influence the next-generation of MG’s, injecting some much needed excitement into the brand.

We'll bring you all the latest news from Shanghai as it happens on this page...